Slate’s Choose Your Own Apocalypse Game

I just stumbled onto cataclysmic gold. As part of their End of America series, Slate just released an online module that features 144 different catastrophic scenarios, all of which were suggested by their readers. This is super convenient considering that tomorrow is the rapture, according to crazyman Harold Camping. You can pick and choose what scenarios you think are the most likely, and you’ll get real-time updates on the Armageddon you’ve chosen—their Apocalypse Matrix reveals if your end times will be bloodless or violent, and whether you blame mankind or nature. 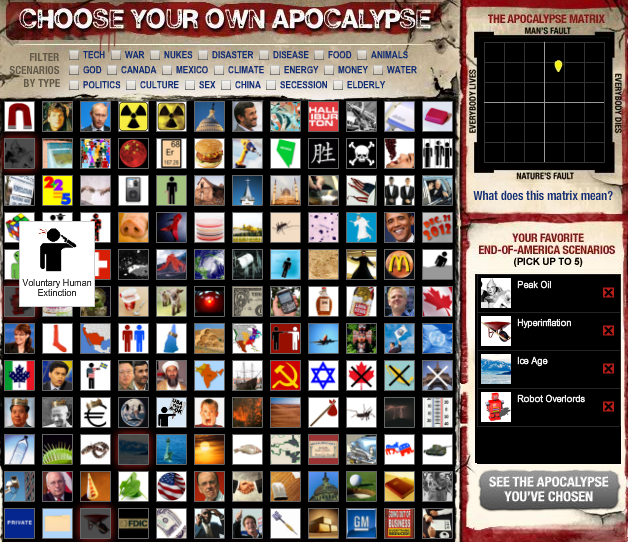 That’s some insightful shit. It’ll really help you determine who you are and what you believe in. You can also compare your choices with those of the average Slate reader. Apparently, I’m a bloodthirsty misanthrope who believes mankind is stupid and fallible and that America will destroy itself in a bloody mess, which isn’t so far from the average thus far. You can figure out where you fit in by going to the Choose Your Own Apocalypse module!

The Campus Socialite's Exclusive Interview with The Devil from Acapulco