That’s All Folks: The Best Series Finales of Our Generation (Part II)

Jim Morrison must have been clairvoyant, or just taking hits of that wild acid that makes you flashforward rather than flashback, because he saw the end long before any of us unfortunate television viewers did.  But it’s not all bad, because with the closing scenes of any series comes to potential to make history and enter the annals of television lore as one of the most memorable series finales of our time.  On Monday we showed you the first five of The Campus Socialite’s ten best series finales of our generation.  Today we have the pleasure of putting a bow on that list and connecting you even deeper to the finest that modern television programming has to offer.

Already close to overstaying its welcome in primetime, Cheers delivered on its feel-good (but not too good) brand of comedy in the finale, the second-most-watched behind M*A*S*H’s. The episode used reliable bits like bringing back old friends (Diane stops in for a visit!), wrapping up characters’ love lives (Rebecca trots off with her plumber boyfriend), and solving well-worn mysteries (Woody’s real name was Huckleberry?) but left plenty of room for tenderness. Seeing Sam close up shop and tell a would-be patron outside the door, “Sorry, we’re closed,” made even the crustiest barfly get a little sudsy around the eyes.

The montage that closed Alan Ball’s masterful HBO drama was less “TV” than “six-minute-long gut punch.” As a weepy Claire drove off to begin a new life in New York, we witnessed the future demise of each of the show’s tortured souls, backed by the strains of Sia’s gut-wrenching ballad “Breathe Me.” The sequence flipped back and forth from Claire’s present to the future; comfort that life will go on for the Fishers. (Well, until they all die.) Rare is the series finale that leaves you numb, devastated, hopeful, and heartbroken all at once: Six Feet Under nailed it.

What can I say? I have a soft spot for the six pals with the impossibly large apartments and wasn’t disappointed with the super sappy Friends‘ last episode. TV’s most annoying couple, Ross and Rachel, got back together. Yearning parents Monica and Chandler adopted twins and moved to the ‘burbs. Phoebe … well, did … something. And Joey decided to move to California (and we know how well that turned out). Over 52 million Americans tuned in to see the gang grab their last cup of joe at Central Perk, and I, for one, was broken up to see them go.

To those who hated the Seinfeld finale I say: Yada yada yada. Watching the two-parter, which found our favorite foursome stranded and then jailed in a small New England town for not being good Samaritans, was like seeing a televised cross section of show creator Larry David’s brain under a microscope. Bitter, selfish, and misanthropic, the Seinfeld send-off was bleak, though fun at times — come on, who didn’t love seeing the parade of “character” witnesses from past episodes? Babu! Peterman! Poppy! Teri Hatcher as the woman with fantastic breasts! But in the end, the show about nothing ended with Jerry and the gang in prison — a properly nihilistic exit.

Show creator David Chase never played nice, so why would he start in The Sopranos finale? Still, some fans were up in arms about Chase’s quirky close to the dark mob drama, which pretty much amounted to Tony, Carmela, A.J., and Meadow meeting for dinner at a diner. Yep, a diner. Knowing that we’re chumps, Chase played us with every lingering look Tony gave a patron (would that guy be the one to finally kill the mob boss?), the blasting of Journey’s cheese-rock anthem “Don’t Stop Believin’,” and, of course, the abrupt jolt of blackness upon Meadow entering the diner that filled our screens. Crude, rude, and no time for emotional B.S., this finale was a delicious end to a show that reveled in the ugliness of humanity. 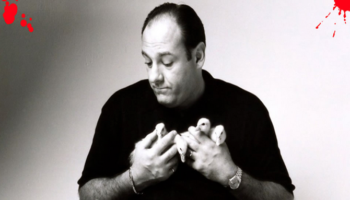