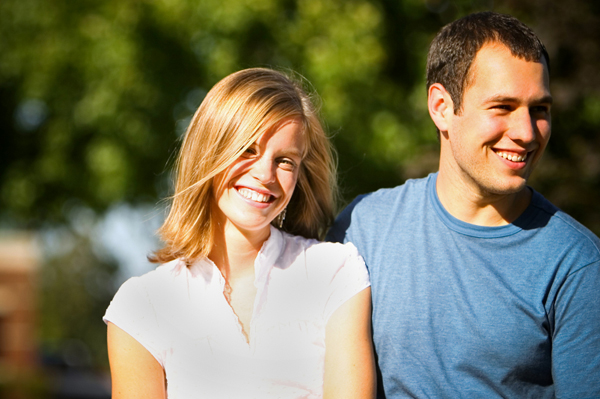 Starting a new relationship is for the most part exciting and sweet, but at times can definitely be awkward and nerve-inducing. But the best thing about dating someone new is that it is still relatively innocent and normal. No one wants to come off looking like a complete Stage 5 clinger, so there are boundaries and rules that you just don’t cross in the first few months (if you want to continue dating).

I once dated a guy who said all of his past girlfriends were mental and I didn’t seem that way at all. Well truth be told, smart girls don’t let their freak flag fly high until we know you won’t break things off over something stupid. Then we become mental. That’s why the beginning is so good, you’re both on your best behavior (for the most part, Captain Morgan can get in the way sometimes) and you want to show him your best you, not the “I’ve had too much to drink and now I am talking nonsense” you. So here are a few of the things I like best about new relationships.

One of the nicest and wallet-friendly perks of a new relationship is that your guy won’t have any problem paying the bill. When you first start dating someone, I think it is natural for men and women to fill the gender roles we’ve been seeing/watching/reading about our whole lives. Men like to take care of their girl, and want to be the chivalrous man who will open doors and buy you dinner. I’m not saying it’s like this for everyone, but at the end of the night, he will pay, and she will bat her eyelashes, thank him for dinner, and if you’re lucky she’ll let you cop a feel.

He Doesn’t Act Gross Around You…Yet

Another huge plus of having a new relationship is that your new man won’t be picking his nose, trying to Dutch Oven you as a joke, or burping the ABC’s. Before you get completely comfortable with someone in a relationship, you have boundaries that you don’t cross in front of each other because you’re simply embarrassed. In the beginning, girls don’t wear their nude, full-coverage panties for a reason, they are wearing the sexy, black boy-shorts so you will be coming back for more.

From your first kiss, to first base, to finally getting laid, new relationships mean new hook-ups. Having someone there to get close to while you watch reality TV (Added new dating bonus: your guy will be more willing to watch Teen Mom and Housewives with you at first, because he really just wants to hang out with you. Aww.) and fool around with during commercials is fun and easy. Every first you have with your new guy is remember-able and sweet during those first few months, so take it all in while it lasts.

Whether it’s the butterflies you get while you’re kissing, or the nervous feeling in your stomach before a date; new relationships makes you feel like you’re back at a middle school dance and you just had your first kiss. All of the new sexual tension and energy makes for some great foreplay and passion-filled sleepovers. Even if it’s something small like the first time you hold hands, or the first time you wake up with drunken sexts to him and don’t feel embarrassed, being in a new relationship is a nice change from the single life.

October is For Courting

This Halloween Create Your Own Costume