The Heaviest of Questions: How Do I Get My Girlfriend to Lose Weight? (Part I)

Man has been seeking the answer to certain burning questions for all of eternity.  What is the meaning of life?  What came first, the chicken or the egg?  Is TuPac Shakur alive?  And, of course, how do I let my girlfriend know that she is getting fat without her suffocating me beneath her mammoth girth?  Ever since Adam stuck it to Eve, this subject has been taboo – as off-limits and insulting as making an FDR joke in the handicap seating area of a ballpark.  But why should us men cower in fear of our larger, jollier female counterparts any longer?  There must be a way to subtly confront our chubby chicks and let them know that, not only for our own selfish devices, but also for their own well-being – it’s time to put down the gravy boat and shed a few lbs.  Before I dive into the X’s and O’s of how to get your lady to drop some unwanted poundage, please be warned that under no circumstances should you attempt any of the following strategies during their special alone time (i.e. watching Grey’s Anatomy and American Idol), menstruation, or in the company of those whose safety you care about because, if executed improperly, the consequences may be dire.

I never said that this was going to be easy.  Getting your girl to lose weight may require you to trim down yourself and hit the weights and treadmill more often than you are used to.  Consider this plan a trial in reverse psychology as you are subliminally letting large Marge know that she is getting fat by showing her that you aren’t satisfied with your own body image.  Hopefully, by you eating more broccoli and cutting out junk food, she will take her focus off the KFC Famous Bowl for one minute and understand that she may also benefit from a proper diet and steady exercise.  This approach is relatively safe because even if she calls you out on trying to get her to slim down, she hopefully will understand that you were trying to be as gentle as possible and even willing to join her on her journey to a sexier figure.

Shower her in clothes… that are too tight

The thought of you in a women’s clothing store is about as foreign as Balki from Perfect Strangers, but it is just another measure that needs to be taken in order to carve down your tubby sweetheart.  If you’re anything like me then you probably know about as much about women’s dress sizes as you do about long division (seriously, it’s a miracle I passed the 4th grade, that shit is brutal), so I suggest buying the tightest possible pants or top for your girlfriend.  When she tries on these new clothes and notices she has a natural fanny pack bigger than an Asian tourist in NYC, she will have to realize that she has packed on some junk in all the wrong places.  If you are ballsy enough and really wanna force the issue, you can polish her off with a comment like “Oh, I’m sorry I thought this was the size that you normally take, I could’ve sworn it would fit you.”  Now, she can either return the clothes, continue eating her way out of a relationship and resign herself to a life spent in sweatpants or hit the gym and do something about it.

“Serve” her a wakeup call

To steal a line from the most accomplished wizard in Hogwarts history, Albus Dumbledore, “Once again, I must ask too much of you Harry.”  Now, I am aware that you probably aren’t Harry Potter and I certainly am not Professor Dumbledore (that dude is old as fuck and I could never grow a beard that manly), but to pull off this next move, you may need to conjure up magic.  First you will need to cook regular meals for your big boned beauty, an unusual practice for most dudes but one that typically goes over well with the womenfolk – particularly the heavier breed.  Once it’s feeding time, you will give both yourself and your girlfriend smaller than average portions in an effort to get her to ask for more food.  Two things can result from this withholding of grub: one, she can just go on and eat what is in front of her and be done with her meal, in which case you win because she is getting by on smaller sized meals or two, she feels ashamed when asking for more food and acknowledges that she needs to eat less.  Understand that by employing the “reduced portion size” method, you may be starving yourself in the process, but you can probably afford to lose a few libras yourself.

Introduce her to the wonderful world of yoga

The main problem for many overweight people in general is that they fail to realize the strong correlation between an active lifestyle and their happiness.  I can attest to this relationship between exercise and a positive life outlook because on my face is often plastered a shit-eating grin thanks in large part to my satisfaction with my own body image and health.  As someone who runs everyday and does yoga from time to time, I assure you that some legit cardio work will keep your mind at ease and your body looking firm.  Let your special lady know that you have found the tonic she needs to relax and sign the two of you up for the spiritual journey known as ashtanga vinyasa yoga – a high-energy, calorie killing form of yoga that will increase flexibility significantly.  You aren’t even stretching the truth by telling her that yoga will relieve her stress and, if all goes well, she will become a chiller, more self-assured and sexy woman who is a wildcat in the sack.  Even in the worse case scenario, you will get to see some thinner, gorgeous women in tight pants at yoga class.

At the risk of tiring you out from all this advice, I will end Part I here and let you catch your breath and rejoin us on Wednesday for the second installment of our special report on how to sculpt your flabby girlfriend into a regular smokeshow.

The Dos and Don’ts of Resume Writing 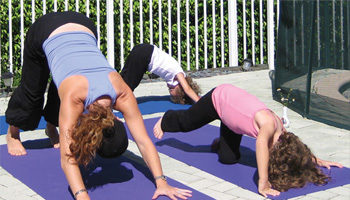 Three Tips to Finding a Workout Solution For Your College Life

15 Ways To Fight The College Freshman 15

Emerging Artists You Should Know About, Beauty Tips to Save Money, Best Ways to Quit Your Job

Maintaining a Healthy You