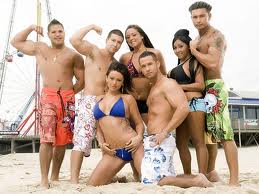 We have matched each cast member of everyone’s favorite reality show with the professional athlete that most represents his or her personal style and attitude.  Click through for the breakdown.

The stout Yankee catcher/manager was famous for speaking in “Yogi-isms.” His mumbled tone and eccentric attitude made him a fan favorite and media darling to this day. “Snooks” has invented her own special language, discernible only by “Jersey Shore” regulars or anyone who has had five or six too many. Even her waddle-like walk is similar to the Yankee who has the most World Series Championships of all time. Every night when Snooki goes out and gets shut down by Vinny and a handful of other guys, she has often uttered the famous Berra phrase, “The game isn’t over ‘til it’s over.” Miss. Snooki, the game and your fifteen minutes are almost over.

NBA rookie forward, Blake Griffin, has taken the league by storm with his high-flying dunks and extremely aggressive style of play. J-WOWW stands out in a crowd and, just like her doppleganger, would be a beast on any playing surface. Her most recent facial on Sammi “Sweetheart” reminds us of Blake’s gravity-defying jam on Knick’s center, Timofey Mosgov, earlier this season. Bottom line is, when the game is on the line, you want a monster who can overpower anyone in their path. J-WOWW and Blake Griffin, aside from about 20 lbs of silicone, what’s the diff???? 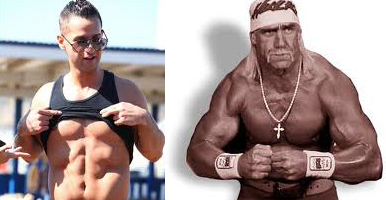 The “Hulkster” is an American icon. A man with 24-inch pythons that he was never afraid to show off to a crowd. When “Sitch” gets in the club, you can all but guarantee that his shirt will be lifted with a group of googly-eyed co-eds standing in a circle admiring the show. Both of these men give a hell of an interview and clearly have no shortage in the self-confidence department. When it comes down to it, Hulk never actually had to fight. He got paid millions to talk a big game and flex his muscles. Sounds like an MTV contract could be coming in his near future. 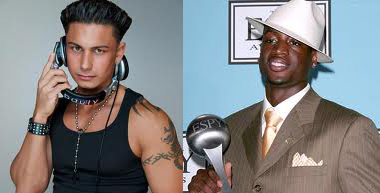 Pauly D has proven to be the most talented of all the cast mates. He goes under the radar, allows The Situation to take the pressure and first round of grenades. He always stays clear of landmines, while keeping his eyes on the prize. He shows loyalty to Rhode Island, still living there while others have moved to apartments in NYC or bought new houses on Long Island. Remind you of someone? When Lebron James left his hometown, spurning an entire state and causing the entire country outside of Miami to despise him, Dwayne Wade just kept cool. Miami is his town, he has already won a championship. Lebron goes out and takes all the pressure, gets shitted on left and right and comes off as a total asshole. Wade is Mr. Smooth, dating smoking hot actress Gabrielle Union while Lebron has been with the same GRENADE since high school. It’s T SHIRT TIIIIMMMMMEEEEE. 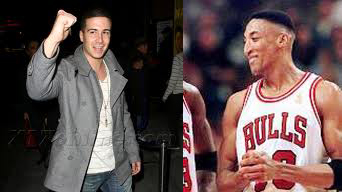 Scottie Pippen was the prototypical NBA “wing man.” When Michael Jordan would score, Pippen often picked up the scraps. So many scraps, in fact, he ended up with 6 NBA titles and an induction into the Hall of Fame. There have been plenty of times when Pippen would drive to the basket, about to dunk it, and MJ would come out of nowhere, fly into the lane and steal the bucket. Vinny serves this same purpose in Seaside. He is the wing man portion of MVP (Mike Vinny Pauly), going out and rounding up the best prospects in the clubs. Sometimes, “Sitch” and Pauly let him take it down so  his stats can remain high and his Hall of Fame future is ensured. Then there are the times when Vinny has to take a piss, and by the time he gets back, The Situation has his girl and is on his way out the door. 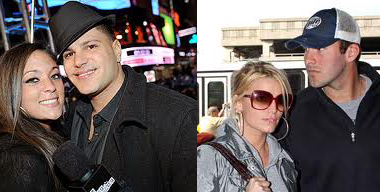 Tony Romo became the Cowboys starting QB and took the NFL by storm. His rocket arm and gritty attitude made him a media and fan darling almost overnight. He was going to be the quarterback to lead Dallas back to national dominance and reclaim their throne as “America’s Team.” Cue Jessica Simpson, the blonde bombshell who started dating Romo a few years back. In their first year as a couple, Romo made the playoffs and led Dallas down the field for a last second, game-winning field goal opportunity. With Simpson in the stands, Romo dropped the ball on the final play and was unable to even give his kicker a chance to win. His career has never been the same and now the Cowboys are one of the worst teams in the NFL. Ronnie came into season one stating emphatically that his number one rule is “do not get wife’d up at the shore.” When single, Ronnie has been a beast, triple-kissing and screwing his way into true player status. But as the season wore on, Sammi “sweetheart” came into the picture. She would keep him in on nights when all of the roommates would go party. In Miami, he had enough. He called Sammi a “c-nt,” went out, and showed us all what could have been. Every week, we all hope  he will drop her and regain his Super Bowl potential. Hasn’t happened yet and time is running out. Those steroids can’t last forever; the career of an inflated Jersey Shore cast member is even shorter than that of an NFL player. 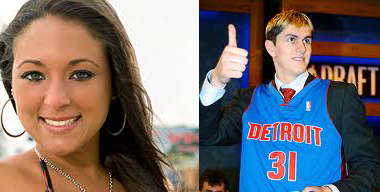 They both showed a lot of promise, looked great in warm-ups. Then the game started, and Darko and Sammi just ended up being terrible in every way. Nobody cares about either of them and the NBA and Seaside Heights would both be better off without these losers.