For those new to fantasy football or people who are clueless, here are my nine ground rules for your fantasy football leagues. I was going to do 10 like a normal person would, but I couldn’t come up with the 10th, sorry… 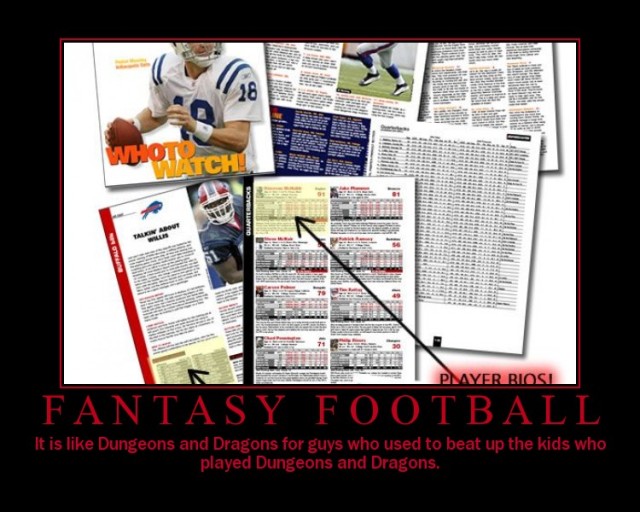 1. If you are still participating in a snake draft please join the 21st century. The auction draft is the only way too go. Doing a snake draft instead of an auction draft is like using a Zach Morris cell phone even though you have access to the newest version of the iPhone. Four years ago I was one of those people who thought the idea of doing an auction draft was completely ridiculous. After participating in one auction draft I was sold. This is the right way to conduct all fantasy sports drafts. It is common sense. Is it fair that a random order given by computer decides who gets Chris Johnson or should Johnson be available to everyone in the league? If your answer is part one of that question you can stop reading this column now, you aren’t wanted.

2. This is easily my biggest pet peeve regarding fantasy football. The team your root for has to 100% come before your fantasy squads. I am a Jets fan. If I have Tom Brady on one of my teams and the Jets are playing the Patriots , I want Vernon Gholston to snap his body in half. Wait a second…that can’t happen, Gholston couldn’t get to the QB playing backyard football and counting 7 Mississippi with no one in front of him. Substitute David Harris for Gholston. This means while you are watching your team on TV, you are not looking at your phone for other scores, switching the channels between plays, nor have a computer open with a stat tracker up.

3. If you don’t have a favorite team and you watch football only for your fantasy team just stop. You are not a football fan and you don’t deserve the right to enjoy all the joys of fantasy football. That is worse than women who watch the Super Bowl to see the commercials.

5. It is mandatory that you have your own personal 12 pack of beer. If you’re not doing a fantasy football draft drunk your not doing it right.

6. If you bring your computer to the bar to follow your fantasy football team while the games are going on, please proceed to jump off the nearest bridge. I am probably the biggest sports dork there is, but this crosses the boundary. The score of your fantasy game will be there when you get home, having a computer in front of you will not change anything.

7. Always pay attention to your team even if you are out of the playoff hunt. It is unfair to everyone else in the league fighting for positioning. This rule gets broken far too often. Take 5 minutes on Wednesday night and set your roster to make sure everyone is playing. This isn’t difficult.

8. All fantasy sports team names should be inappropriate. If you can say your team name in front of your bosses at work that means it isn’t good enough.

9. If at all possible do your draft in person. This makes the mandatory drinking more fun and when someone does something stupid it’s more enjoyable to rip them to their face than through a chat.