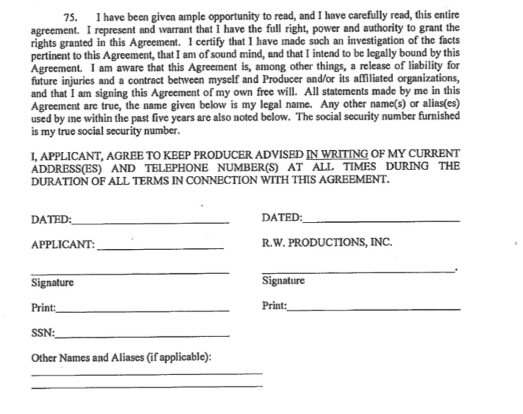 Yesterday, the Village Voice obtained a copy of the contract from MTV‘s “The Real World.” Needless to say, it’s completely ridiculous in every way, so we thought we’d share it with all of you. What follows are some of the documents most unbelievable stipulations (also via Village Voice). And you can read the contract in whole on the here.

• You may die, lose limbs, and suffer nervous breakdowns. (Stipulation 1)

• If you undergo any medical procedures while involved in the show, they carry the risk of infection, disfigurement, death. (4)

• You may be humiliated and explicitly portrayed “in a false light.” (12)

• Producers are under no obligation to conduct background checks on your fellow cast members. (7)

• Interacting with other cast members carries the risk of “non-consensual physical contact” and should you contract AIDS, etc. during such an interaction, MTV is not responsible. (7)

• You don’t have STDs, but accept that other people on the show might. (18)

• You’re not pregnant and you won’t become pregnant before the show’s done filming. If you do become pregnant, you’ll tell the Producer immediately–and pregnancy is grounds for dismissal. (38)

• You can’t change your physical appearance during filming, without the Producer’s express permission. (26)

• You grant the Producer blanket rights to your life story. (49)

• The Producer can do pretty much anything they want with your life story, including misrepresent it. (49)

• Your email may be monitored during participation. (20b)

• You promise not to hide from MTV cameras in establishments where they can’t film. (20a)

• You authorize the Producer to have total access to your school records, government forms, your credit history. (19)

• The production crew can show up at your personal house at any time to film and/or to take anything they want, as long as they return the objects once production has ended. (20a)

• Under ordinary circumstances, all of this would be considered a “serious” invasion of privacy. (11)

• For one year after the show’s final episode airs, cast members are required to participate in all producer-determined press and forbidden from engaging in any media (radio, television, chat rooms, blogs) without the Producer’s written permission. (9)

• The Producer holds the authorship and copyright to every photograph, email, website, sound or video recording, documented performance created in relation to the program, on every medium imaginable. (8)

• You’re obligated to participate in a Reunion Special for up to five years after the show ends, you’ll be paid $2500 for your involvement, and the Producer only has to give you 14 days notice. (50c)

• You’re required to participate in book or home video projects for two years after the show ends, and you’ll be paid $750.00 for each one. (50f)

• While you’re on the show, you’re responsible for all long-distance phone charges. (16a)

• The explicit list of physical tasks you might be subjected to, enumerated in the contract, include traveling by “air (whether via helicopter, commercial airliner, glider, private aircraft or otherwise), train and/or automobile, as well as strenuous and/or dangerous and/or mental activity, including but not limited to, horseback riding, jogging, bicycling, motorcycling, exercise and/or weight equipment, skydiving, swimming, bungee jumping, parasailing snorkeling, jet skiing, amusement park activities, rock climbing, engaging in contact sports, hiking, kayaking and boating.” (1)

Kevin Durant Goes on a Tear at Rucker Park (Video)