The Reusable Portable Toilet: The Best Invention Ever? 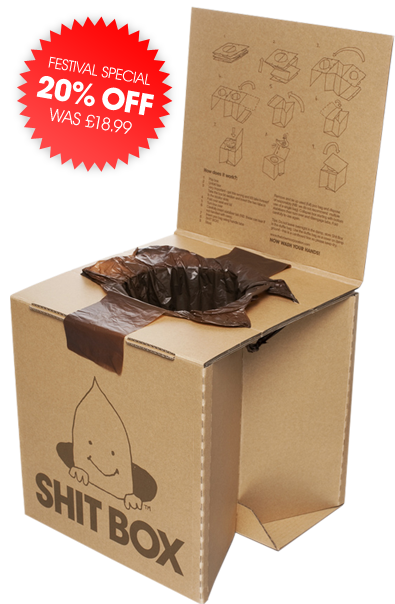 It’s festival season, y’all! That means a few things: music day in and day out, thousands of people all loaded on tons of drugs, being dirty for long periods of time, your summer job money disappearing before you even get back to school, and the dirtiest toilets you ever sat your ass on. That’s where the The Brown Corporation‘s aptly named “Shit Box” comes in. It’s basically a cardboard box that you poop in, and everything is biodegradable (for you hippies out there who care about the environment). Curious? Read on…

The idea was invented by Richard “The Big Shit” Wharton in 1989 when he was at the Glastonbury Festival. All of the porto-potties were gross and smelly, and puking from the stench isn’t conducive to a relaxing dump. He wandered back to his tent, where he looked at a tissue box and thought to himself “if the box was bigger and sturdy, I could rip out the oval bit in the middle and insert a carrier bag” and thus turn it into a toilet.

He put the idea on hold for 20 years, but after 50 prototypes and lots of dropped deuces, the Shit Box is now a reality, and it’s selling like hot cakes. Why? The answer is obvious: It’s festival season, and there is not one person in the world who doesn’t share Wharton’s view about the on-site crappers. I myself plan on investing in one as soon as possible, because there are a bunch of festies I plan on hitting up.

So buy yourself a cardboard toilet for the summer. It comes with 10 bags that are biodegradable, so after you drop a log just wrap it up and bury it in the mud…next year you might come back to find a beautiful garden of plants growing there, using your stuff as food. It’s guaranteed to be 1000% better than holding your nose, hovering over a toilet covered in other people’s excrement.