All contemporary professional sports leagues have some kind of major broadcasting or structural flaw that takes away from the integrity and enjoyment of the game. Hockey has Versus, baseball has the month of June, basketball has Jason Kidd’s son, and the NFL has a dancing robot named Cleatus.  Cleatus is stepping up his dance moves to fill the large void of both annoyance and screen space John Madden left behind. And you thought nothing could bother you more than those polish sausage fingers he had.

Seriously though, can someone please explain to me why the NFL hired a Mega Man boss to dance around on the half screen between plays? And why does a robot need to stretch? Why does a futuristic football machine, presumably built from metal, need to wear a helmet or shoulder pads? Why does he have an electric guitar? It doesn’t make any sense. How am I supposed to explain this to my kids?

Don’t get me wrong, I love robots as much as the next guy. I mean Optimus Prime is present in most, if not all, of my wet dreams. Whoa, I said he’s there, not that I am boning him, jeez, who do you think I am? Now, I don’t think I need to get into the intricate details and physics of a Rock’em Sock’em threesome in order to convey my point that Cleatus is out of place in the game of football. Someone needs to take him, John Clayton and all the female sportscasters to be melted down and destroyed like a T-1000. I would also like to nominate Bender and The A.W.E.S.O.M-O 4000 as potential new robot football representatives. 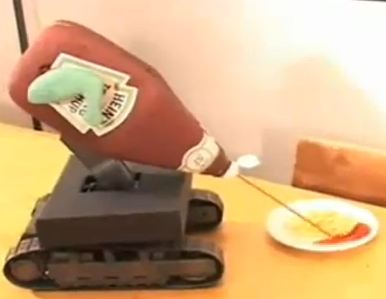 Ketchupbot is the Greatest Invention Ever (Video)