The longer I live the more I realize that sadly most people can be categorized into specific groups. Through my travels, I have encountered eight common male stereotypes that I believe exist at almost any college.

The Brute: Usually a very big guy with an un-proportional small mental acuity, his purpose in life is solely to protect the well-being of friends and stand behind the smartass talking shit at the parties. He is also a good quick way to get the front of the keg line, but besides that he’s no different than a brick wall. He is an easy target for jokes due to his low IQ and overbearing size, but it is not recommended as his only line of defense is his strength, and he will most likely take it out on you or at the very least break something in frustration/retardation. (Avoid steroid jokes during beer pong.)

The Wordsmith: Through adaptation, this savvy jackass has become a master of the English language in order to compensate for his not so striking looks, or the “from hunger” look he sports in addition to a majority of Africa. His tongue is as sharp as a knife, yet he hides behind a shield of sarcasm. He thinks he is superior for knowing how to manipulate words better than you do, and he’d probably do really well with women if he wasn’t constantly arguing with them. He is either an extremely shy individual or uncharacteristically obnoxious.

The Next Level Instigator: This guy is your number one nemesis on Friday-Sunday. No matter how drunk, or what condition you are in, this asshole is the one that insists on that one more shot or hit that puts you out of commission. Failure to comply with his elusive command will result in immature reaction that directly targets your masculinity. Normally you would be more mature to fall for his silly ploy, but on this night, the night in which falling off the wagon has clouded your judgment, you fall right into his trap and become victim to an unconscious level of intoxication. As he watches your eyes begin to roll back into your head, he maniacally chuckles to himself thinking about how clever he is and walks away to leave you for dead.

The Stoner: When he isn’t plastered in front of the television set with a giant bag of Doritos absorbing mindless programming, he is facing around a gram of green grass he so eloquently describes as “the cure for everything”. He’s about as entertaining as Terri Schiavo and about as reliable as FEMA. If he could have it his way he’d walk around with an IV containing THC all day. Somehow he never has money to go out or pay bills, yet he is always high.

The Alcoholic: This guy wakes up in the morning to a can of beer. He stopped looking in the mirror a year ago, because that’s around the time he stopped caring about the tire growing in his stomach. He lives solely for the next drop of alcohol that touches his lips, and you never want split a bottle or case of alcohol with him because he drinks twice as fast/much as you do. While it takes him a case or a liter to get him “three sheets to the wind”, once he gets there he transforms into a belligerent King Kong. All hopes of reasoning with a human being have been tossed out the window, as he has now devolved into a form of monkey, picking up tables and chairs, throwing them around the house as if he was a subject in some inhuman genetic engineering project. At this point of the night your best chances of getting out alive is by running to your room and locking the door. He will continue to roam like a zombie, but will eventually become confused after hours of no interaction and will either pass out on the floor or stumble to his bed. Hope to god he doesn’t figure out how to leave the house/dorm, or he will most likely wake up in jail or the hospital.

Sensitive Sam: This particular character most likely grew up in a house of women. Whether it be through divorce or a tragic accident at the factory he grew up without a masculine role model and ended up graduating high school a tad bit soft. He lacks the swagger or confidence that most young men his age have because he doesn’t really understand what it is to be a man. He is extremely insecure, and deeply cares about what other people think about him to the point where he is willing to compromise who he is. He hands out compliments like pieces of gum until its just annoying. You would just shake him and tell him to stop being such a bitch, if you didn’t think he’d spend the rest of the night passive aggressively sulking, telling everyone he’s fine in a somber voice despite the fact he is sitting in the corner staring at the wall.

The Tragic Hipster: His attire consists of a tight band or colored tee under a hoodie with skinny black jeans. He hides his eyes behind his “I’m emotional and misunderstood” bangs. He doesn’t mingle well with most other guys, and therefore has a specifically tailored group of hipster friends. Since he’s been listening to a guy complaining about not getting pussy for most of his life he often finds himself in the same predicaments.

Sketchy Drug Dealer: When he is not in jean shorts and a Timberland polo, he is most likely wearing a black hoodie with cheap pair of jeans. Ironically, despite his extra responsibilities he is probably the most unreliable person in your group of friends. He lacks a sense of time, mind and personality. His two most common activities are playing Xbox or going to various shady parking lots to do his non-taxable “job”. He is of questionable moral character, and probably the reason you lock your door. You would think his line of work would make him comfortable with social communication, yet each visit you make to see him seems more awkward than the previous one. 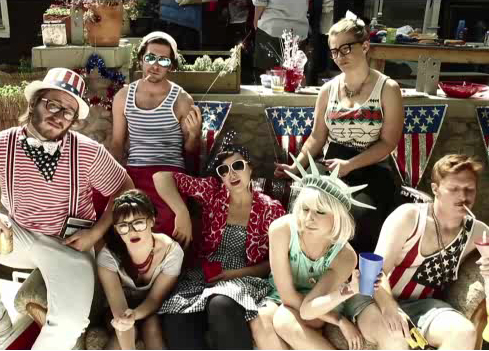