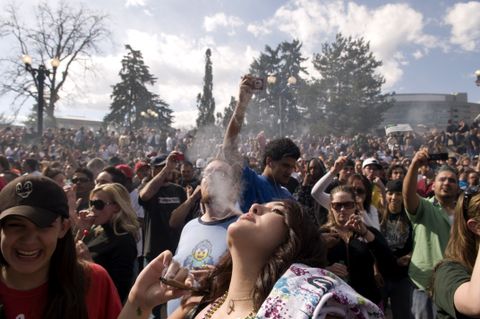 At this point, you have officially been stoned all day. You’ve discussed the role of religion in modern society, how F’n crazy The Moon is, and of course, that big L word that every Stoner loves: Legalization. It’s a touchy subject, despite being practically invariably supported by college students everywhere. People pass out flyers on your campus, provided it’s poncho weather, and you may even have discussed it in a class. Typically, Stoner activism amounts to sitting on a couch and whining, in between bites of Cheesy Gordita. Today is special however, and protest was in the air, especially in Colorado, the self-proclaimed Cannabis Capital of The World. Thousands of students converged upon the streets, which in the ongoing war on Marijuana Laws, may turn out to be a momentous event. Get the full story, and whether you like it or not, my opinion, after the jump.

Giant, group ganja sessions in Denver are nothing new. The cities annual Smoke Out, known as the 420 Rally, occurs every year on this day, and is reportedly, the biggest of its kind. Usually the event draws a crowd of 10,000ish and is more about getting high than it is about actual activism. After all, you aren’t very likely to find the remote while your stoned, much less take on national politics. This year however, brought a very different approach to the beloved holiday. 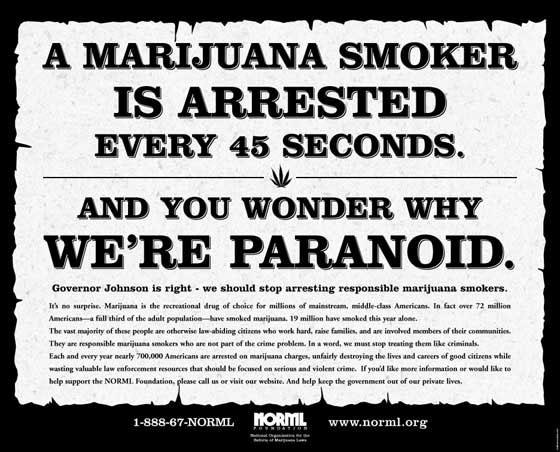 If you spend enough time strolling around your campus, you may have had an encounter with a group called NORML, or The National Organization for The Reform of Marijuana Laws. NORML may seem at first like a bunch of pretentious hippies, with fake dreads, and tacky military surplus clothing. They are, but on top of that, they are also a national organization, and the voice box for any Stoner who’s ever complained about the man keeping them down. NORML always has a presence at the Colorado rallies, but this year marks the unofficial kick-off of their newly annual national conference on Marijuana reform.

When the conference happens, it will feature a variety of panel discussions, on the legalization of everyone’s favorite plant family. Some of the titles of said panels include “Pot-N-Politics,” “Marijuana Nation,” and “The Feds, Marijuana and You.” The keynote speaker at the conference will be U.S. Rep from Colorado, Jared Polis. Polis is a Democrat from Boulder, and perhaps the most powerful man in America who actively supports the legalization movement. Well, besides Woody Harrelson. In short, it seems that starting this year, NORML is no longer fucking around. With political support, and a legitimate movement complete with conference, the group really is taking the next step. 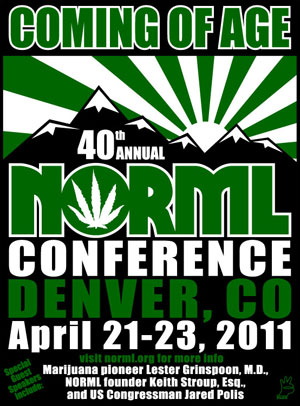 I’ll proudly admit, I haven’t touched weed in now over 4 years. When people ask me why, I say simply that it stopped being fun for me. No moral concern, or spiritual issue. One day smoking started to suck for me, so I stopped doing it. So how do I feel about legalization. Truth is, I don’t know. The immediate benefit I see, is that it would take the money and the power out of drug dealers hands. People are killed over drugs every day, and the only way to get rid of the crime, is to make it legal. On that note however, what about the other drugs? Drugs like cocaine that allow Cartels to seize entire countries, and Heroin that kept The Taliban in power. Where does it end? Do you really want 16 year-olds using Fake IDs to buy Cocaine at 7-11?

Furthermore, if you think making pot legal is going to make it any cheaper, you’re wrong. Do you know how much I paid for my pack of Cigarettes today. $10.50, and that’s lower than if I lived in NYC. If pot becomes legal, the first thing the government will do is slap a just for your convenience tax on every last bag. Then they’ll take all your money and use it to bomb countries with brown people in them, or hand it over to banks as payment for abusing loan customers. Expect to pay as much as you’re paying now, if not more, and all the money to be going to just as scummy a place.

That’s my take, but think about it. Start a discussion on the board, or E-mail me. Speak up Socialites! Regardless though, enjoy your 420.