West Region – “Shut It Down”

While this region does not feature a lot of the top line teams or talent that a couple of the other regions have, it does have a few dangerous teams seeded 6 and lower that could be quite the challenge for the higher seeded teams.  Syracuse is the favorite to come out of the region, despite the back to back losses to end the season and the injury concerns.  They are still the best team in the region, but the road won’t be easy.  This region has my lowest seeded Elite 8 team.  Who is it and will they reach the Final Four?  Let’s find out. 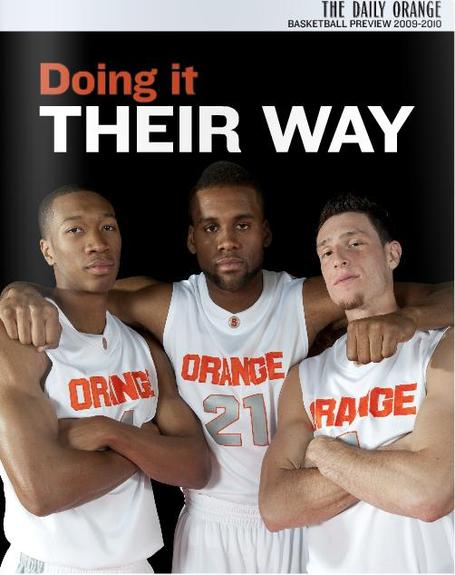 #1 Syracuse v. #16 Vermont – I guess I am required to mention that these teams met in 2005 and that the Joseph brothers are on opposite teams.  Both of those topics have been covered ad nauseam though, so that’s my only mention of either one.  Instead I’d like to mention that despite Wes Johnson’s Big East POY honor, Syracuse goes as Andy Rautins goes, plain and simple.  He’s the most important player (Wes is the best) on this team and I won’t hear a different argument on this.  Andy must stay on the court and limit the live ball turnovers for this team to do what it’s capable of doing.  Also, Arinze Onuaku must be back by the Sweet 16 at the latest.  It’s not so much an issue of what he brings to the table (which is hit or miss a lot of the time) at it is a numbers game since Syracuse plays only 7 guys.  None of those things should be a factor in this game though.  The Pick: Syracuse

#8  Gonzaga v. #9 Florida St. – This game is an interesting matchup between quality guards and quality big men.  Florida St.’s Solomon Alabi is tough down low and Gonzaga’s chances depend on their ability to keep Florida St. off the glass.  Matt Bouldin of Gonzaga, much like Dan Dickau, Blake Stepp, and Adam Morrison before him, is one of my favorite players to watch in the country and the senior’s playmaking ability could give the defensive minded Seminoles some trouble.  I worry about Gonzaga having to travel all the way to Buffalo for this game and how that might affect their ability to be ready to play, but I trust Mark Few to get his squad over the jet lag and show up on Friday night.  The Pick: Gonzaga

#5 Butler v. #12 UTEP – Speaking of streaking – Butler hasn’t lost since the calendar changed to 2010.  That’s a lot of wins in a row.  Of course they play in a weak conference with no opponents that match the talent or athleticism that this UTEP team has.  It’s too bad for the Bulldogs they don’t play this game in historic Hinkle Fieldhouse where Butler is nearly unbeatable.  UTEP’s very talented, but troubled, big man Derrick Caracter is going to be too much for Matt Howard to handle in the post though and the Bulldogs just won’t have an answer.  This is my feeling for the 12-5 upset game this year.  The Pick: UTEP

#4 Vanderbilt v. #13 Murray St. – Although this is entirely irrelevant for this game I want to use this space to mention how ridiculous Vanderbilt’s home court is.  The benches on the ends of the courts and the absurd amount of sideline space are ludicrous ideas.  I’m all for unique gyms and arenas, but this is taking it too far.  Murray St. is one of only two teams (Syracuse is the other) in the field that shoots over 50% from the floor on offense and holds their opponents to under 40% on the defensive end.  Take a look at how the last few tournament teams that have those kinds of stats have fared in the NCAAs.  Oh, that’s my job?  Fine.  They do very well.  The Pick: Murray St.

#3 Pittsburgh v. #14 Oakland – If the Big East coaches had just listened to Jim Boeheim last year when he talked about how good Wes Johnson was and how his team would just be fine without Flynn, Devendorf, and Harris, Pitt’s Jamie Dixon would have been the Big East Coach of the Year.  What he did with this team this year is phenomenal and he continues to show why he’s one of the best coaches in the country.  Picked to finish tenth in the Big East, Pitt got the 2 seed in the Big East Tournament.  I wonder if they have just overachieved all season to the point where they are really more like a #6 seed in this tournament.  I have watched Pitt a number of times this season and every time I do I really can’t figure out how this team won so many games.  They are tough as hell, as Pitt teams normally are, but I am not sure what else they have going for them.  Regardless of whether or not I am missing something, they are more than capable of breezing in their first round game.  The Pick: Pittsburgh

#7 BYU v. #10 Florida – I am going to let me older brother sum up this game for you, who, despite no connection to the University whatsoever, has been on the BYU bandwagon for a while now – “I don’t think the first round game should be much of a contest.  BYU is way underseeded as a 7 and Florida shouldn’t even be in.  Check the (Vegas) line versus other 7-10 games.”  But what about Florida’s and eventually Kansas St’s athleticism?  Won’t that give BYU fits?  “Don’t the whiteness fool you.  The Cougars are very athletic and have no problem running.”  Ok then.  In addition to that, I want to say that Jimmer Fredette is not just my favorite name in the tournament, but a downright assassin on the basketball court.  He, and backcourt mate Jackson Emery, can flat out ball.  The Pick: BYU

#2 Kansas St. v. #15 North Texas – I am one of those people that like when fan bases take part in school specific movements as a show of support and unity with their team.  That being said, I think the billy goat beard thing that caught on in Manhattan, Kansas in a display of solidarity with their star guard, Jacob Pullen, is dumb.  The Wildcats have good guards, but questionable big men, and if not for facing Kansas 3 times, or maybe just beating them once, would have an argument for a #1 seed.  Also, Frank Martin scares the shit out of me.  That guy is intense.  The Pick: Kansas St.

I think Syracuse might get a bit of a scare in the second round against either the Zags or Florida St. if Onuaku isn’t back yet, but their experience and the home crowd will pull them through it late and they will advance to the Sweet 16 where they will meet the Miners of UTEP.  Because of the first round upsets of the 4 and 5 seeds in this region a double digit seed has to advance.  UTEP is more like an 8 or 9 seed anyway though.  Had they not collapsed in their conference tournament, they would have been.  This is not as big a stretch as it may seem.  Their run will end at the hands of the Orange in the Sweet 16 who will move on to the Elite 8.

In the bottom half of this region, Pitt’s overachieving will continue as they take down Xavier and BYU will upset Kansas St.  That’s right, the Cougars will march on.  There are a number of stats that could cause Kansas St. problems not the least of which is the Wildcats reliance on getting to the free throw line.  The thing is, BYU doesn’t foul much and Kansas St. does.  If they lose the free throw battle and then combine that with the deadly outside shooting of BYU and you got yourself an upset.  The Cougars aren’t done yet though.  They will beat Pitt, as well, and advance to the Elite 8.  Simply put, BYU is the better team and they are practically playing a home game in Salt Lake City.  Like I said earlier I think Pitt is overseeded and BYU is underseeded.  Like any good younger brother, I am heeding the elder’s advice.  BYU will have a ton of momentum going into the regional final, not to mention a crowd that will be firmly behind them.  Syracuse alumni and fans are everywhere and travel really well, but I’m not sure how many of them are going to be in Utah.  It won’t matter though.  Syracuse is better and have had no problem playing on the road this season where they lost only once (in the closing of Freedom Hall in Louisville).  The Shut It Down movement will roll into Indianapolis.