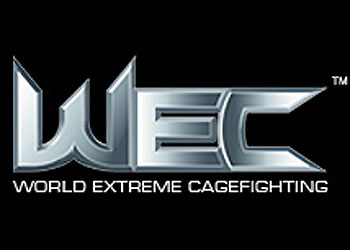 Today, October 28th 2010 Dana White announced that WEC would be merging with the UFC, creating one MMA company to rule them all. Since 2006 the WEC has been owned by Zuffa, UFC’s parent company, but operated completely separately and more or less as another entity altogether. Early this year when WEC ran their first ever PPV supported by the Jose Aldo Jr. Vs Uriah Faber Main Event, Zuffa was accused of limiting the mention of the term WEC, hoping that the brand name UFC might be able to help garner more PPV buys. The success of this PPV, and the “merging of brands,” is what led to the announcement that made it official earlier today.

A ton of UFC watchers are casual fans. I assume most of you reading this are as well. Because of this…WEC has most likely operated under your radar over the last few years, as there has been limited cross-over between the two promotions since Zuffa bought WEC in 2006. Because WEC has existed almost entirely on the VS network there is a good chance that the AVERAGE UFC fan might have never even seen a WEC event or might not be able to name one WEC fighter.

WEC used to be a company much like UFC, containing weight divisions like middle weight, light heavyweight and heavyweight. Over the past few years the UFC absorbed the middleweight and light-heavyweight divisions of the WEC (eliminating the Heavyweight division as well) and chose to market the company as the “home of the little guys”. With the 155 weight class being the only division that existed in both UFC and WEC, WEC became the only place to see exciting fighters like Uriah Faber and Jose Aldo Jr. who dominated in the 145 and 135lb weight classes, both of which were exclusive to WEC.

Earlier today Dana White announced that the last WEC event will be held in December. After that show, at which their lightweight champion Ben Henderson will defend his title against Anthony Pettis, the two companies will merge and become one entity. The winner of the WEC 155 title fight in December will become the number one contender for the UFC light heavyweight title and get the shot at the winner of the Frankie Edgar (champion) vs Greg Maynard (challenger) fight that is taking place on 1/1/11. Those divisions will now become one, with the best fighters from WEC instantly being integrated into the UFC lightweight division and the bottom of the pack at least given an opportunity to make the transition as well. Time will tell how the UFC chooses to trim the fat of a division that will undoubtably be overcrowded come the new year.

The 155 pound division is the only one that has this issue as 135 and 145lb weight classes have never existed in the UFC and both will be completely new additions to a UFC talent pool that seemed to be getting overbooked over the past few months. With UFC running more and more shows each year it only made sense to add two more titles, two titles that will surely supply some of the most exciting fights in the company’s future, as these two weight classes are famous for producing non-stop wars between freakishly skilled athletes.

This merger also severs the partnership between WEC and VS, a network that relied on the company to produce some of its most consistently entertaining sports content. UFC is making up for this by putting on four shows a year on the network, the maximum amount that their contract with competing network SPIKE will allow them to put on.

The UFC will now have 135 and 145 weight classes to go along with their now LOADED 155 division, 170, 185, 205 and heavyweight divisions. Coming over to the UFC will be Jose Aldo Jr, who some say is the best pound for pound fighter in the world. In an interview earlier today Dana White admitted that UFC offered Aldo the opportunity to move up to 155 and fight Kenny Florian in the UFC, which Aldo declined. At the time of the offer, moving up was the only way that UFC fans would be able to see Aldo in the UFC, as the 145 lb division, for which Aldo holds the title, was not yet included in the “big leagues.” Dana was obviously looking for a way to expose some of his best athletes to a larger audience and rather than force them to move up to the weight classes included in UFC competition, White has decided that merging the two companies and including the lower weight classes in UFC is the way to go.

WHAT DOES THIS MEAN?

3) The UFC will be adding TWO divisions, 135 and 145 lbs…but the champions will remain the same.

4) ALL WEC FIGHTERS will carry over to UFC and at least be given a shot to stay with the company.

5) There will be even MORE UFC SHOWS A YEAR with the addition of two divisions allowing for more meaningful fights to take place every year.

6) UFC 155 guys will now be met with the decision of whether or not they should MOVE DOWN to 145 without having to leave the UFC for a less popular promotion.

7) The world will now be FULLY exposed to the MONSTER that is Jose Aldo. Jr.

8) Uriah Faber will now get the full exposure he deserves.

9) The WEC Main Event in December will no longer be for the WEC title but now for the UFC 155 title NUMBER ONE CONTENDERSHIP.

10) There are TONS of exciting fighters that will need to be exposed to the masses because if these guys are going to start headlining UFC PPV’s…they will need some exposure first. The UFC would be wise to throw together some WEC Specials on the company and its history. Few causal fans know how relevant the company has been over the years and just how many current UFC stars made an impact in WEC first (Chael Sonnen, Carlos Condit, Brandon Vera just to name a few).

Here is a Timeline of everything WEC, by Ariel Helwani, to help you get to know the fighters.

Dana also said that Jose Aldo will be defending his 145lb title at the 1/1/11 show at the beginning of the year but that it is still unclear as to who that will be against.

Something that was rumored a while ago and now makes even more sense is that whether it be the next one they shoot or not, that a 135 and 145lb Ultimate Fighter season might not be too far down the line as that show has done a great job of exposing the masses to characters that will one day be UFC superstars and for a couple weight classes that haven’t had their shot at reality TV yet there are sure to be a ton of quality guys to choose from.