Unique College Mascots From Across the Country

It’s football season, and who above all else LOVES football season? The mascots!  Honestly these guys are the ones who get the tailgate pumped up and keep the crowd rowdy while they are in the game. There are so many repeat mascots like bears, eagles, bulldogs or lions, here are a few examples of some unique college mascots. So it’s time we pay tribute to some of the best, and some awkwardly named mascots from around the country.

The tree gives us shade in the summer, leaves to play in during the fall, and they even provide wood during the winter for a fireplace.  But is a tree a college mascot? I find it hard to be intimidated by a tree, but I would still love to have it at games for its entertainment value. 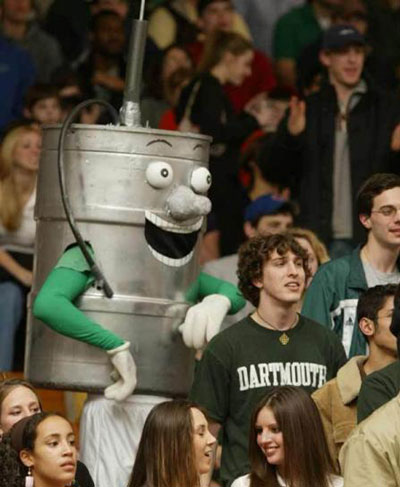 The unofficial mascot of Dartmouth university, these kids apparently love to party and they want to show it with their mascot. Unfortunately there is no official mascot for Dartmouth, but if there was I’m sure university officials wouldn’t allow Keggy.

I think it’s safe to say that Michigan State University’s mascot is a badass. This is an intimidating mascot to say the least, but he also looks like he would be kid friendly.

Thank you Purdue, your mascot is kind of terrifying. But is the guy supposed to be a train conductor and why is he holding a weapon? Either way I think the Purdue boilermaker will be haunting my dreams tonight.

Is University of Cincinnati’s bearcat the product of some weird genetic experiment?  It looks like a wolf or something, but either way I think he’s a great mascot with a high intimidation level. 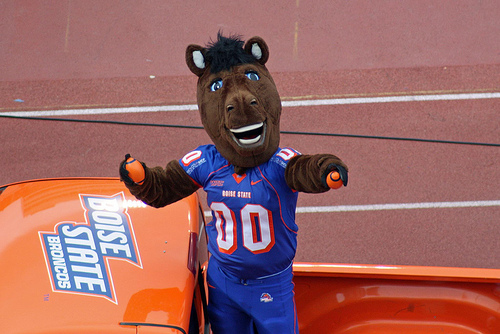 From Western Michigan University and Boise State University: These two mascots may share a name, but they are completely different in every way possible. Boise state buster looks happy and optimistic about life, while Western Michigan Buster looks very apathetic (and a little stoned) about… just about everything.

University of Arkansas -Monticello – This is one of those deceiving photos, a group of cheerleaders sitting around a boll weevil, I bet they don’t know it’s a beetle that isn’t even lethal except to cotton, which happens to be the name of their female team, the cotton blossoms.  I don’t think they thought that one through.

Something about badgers are just badass, but I can’t put my finger on it. I think the badger mascot is confusing to a lot of people because I don’t see badgers as threats, but looks can be deceiving.

Colorado State University- Cam makes the list because he’s not only intimidating, but he also has a real life ram companion. Nothing beats a live animal mascot, except maybe a cute kid mascot.

Between Two Ferns with Bruce Willis

How Weird Is Your University’s Mascot?