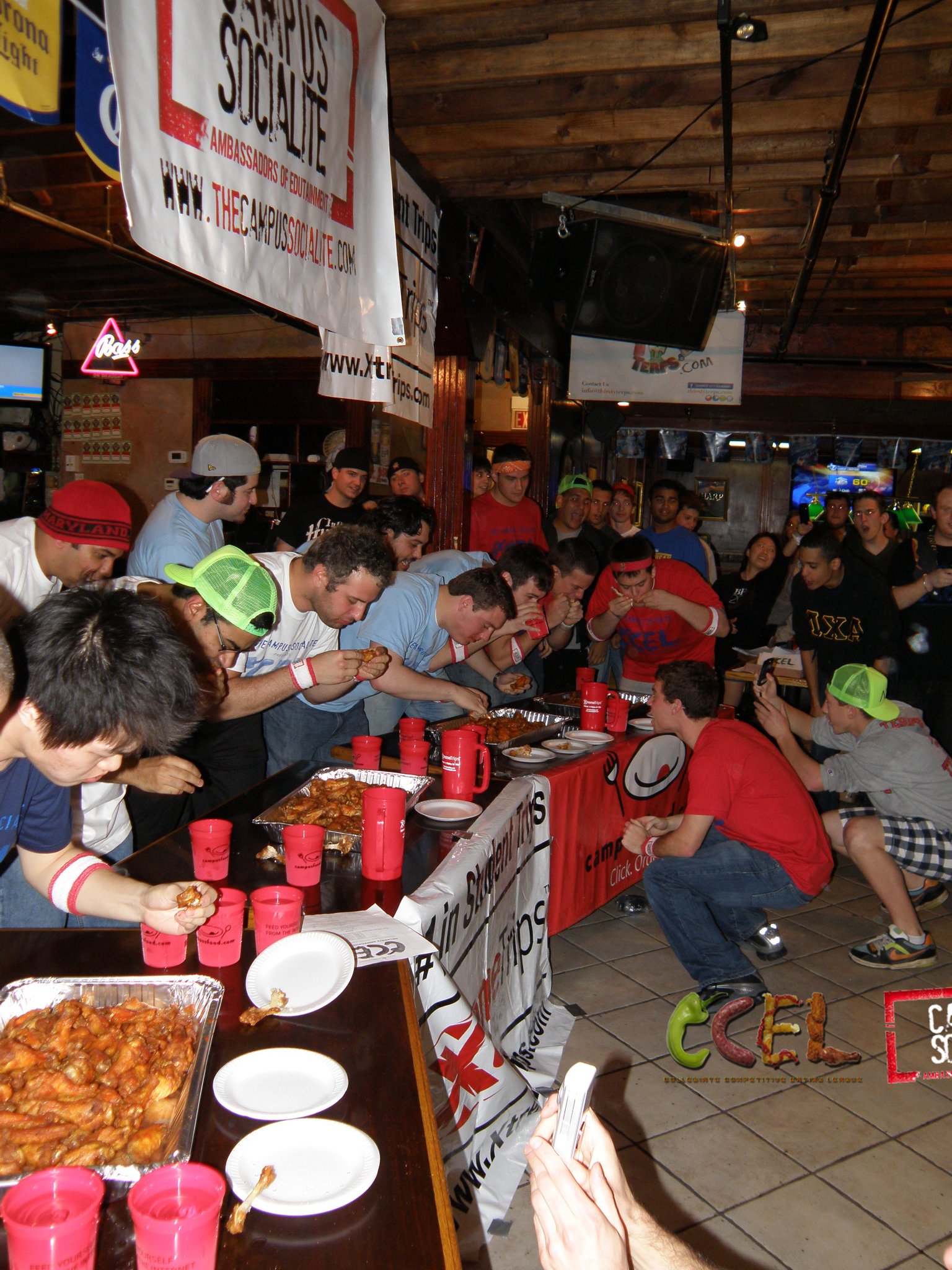 On Saturday, April 16th 2011, the inaugural Collegiate Competitive Eating League Championship was held in College Park Maryland.  You might have heard in the news about a group of students from the University of Maryland that were able to gain approval from the school to make their competitive eating team a recognized campus organization.  The U of Maryland’s college eating team has garnered serious attention across the country and especially here at The Campus Socialite.  We decided to assist them and take them from competing against themselves at local campus restaurants, to building a national league where they can compete against teams at Universities across the country, at some of the hottest college bars and restaurants.  Hence, the launch of CCEL.  The first national event took place at CornerStone Bar & Loft,  a nominated venue vying for the title of Best College Bar in our current Campus Socialite Awards.   Two teams from University of Maryland, a team from NYU and a team from Hofstra, competed in three grueling competitive eating challenges to determine which team would win our first ever CCEL championship.  CampusFood.com was there providing the winning team gift certificates for campus grub, and the Most Valuable Eater (MVE) of the event was awarded the insane gift of a free Spring Break Trip in 2012 to Punta Cana provided by Xtreme Trips!  Check after the jump for information about the event, results, and sick pictures from the messy mayhem that was the inaugural CCEL event. 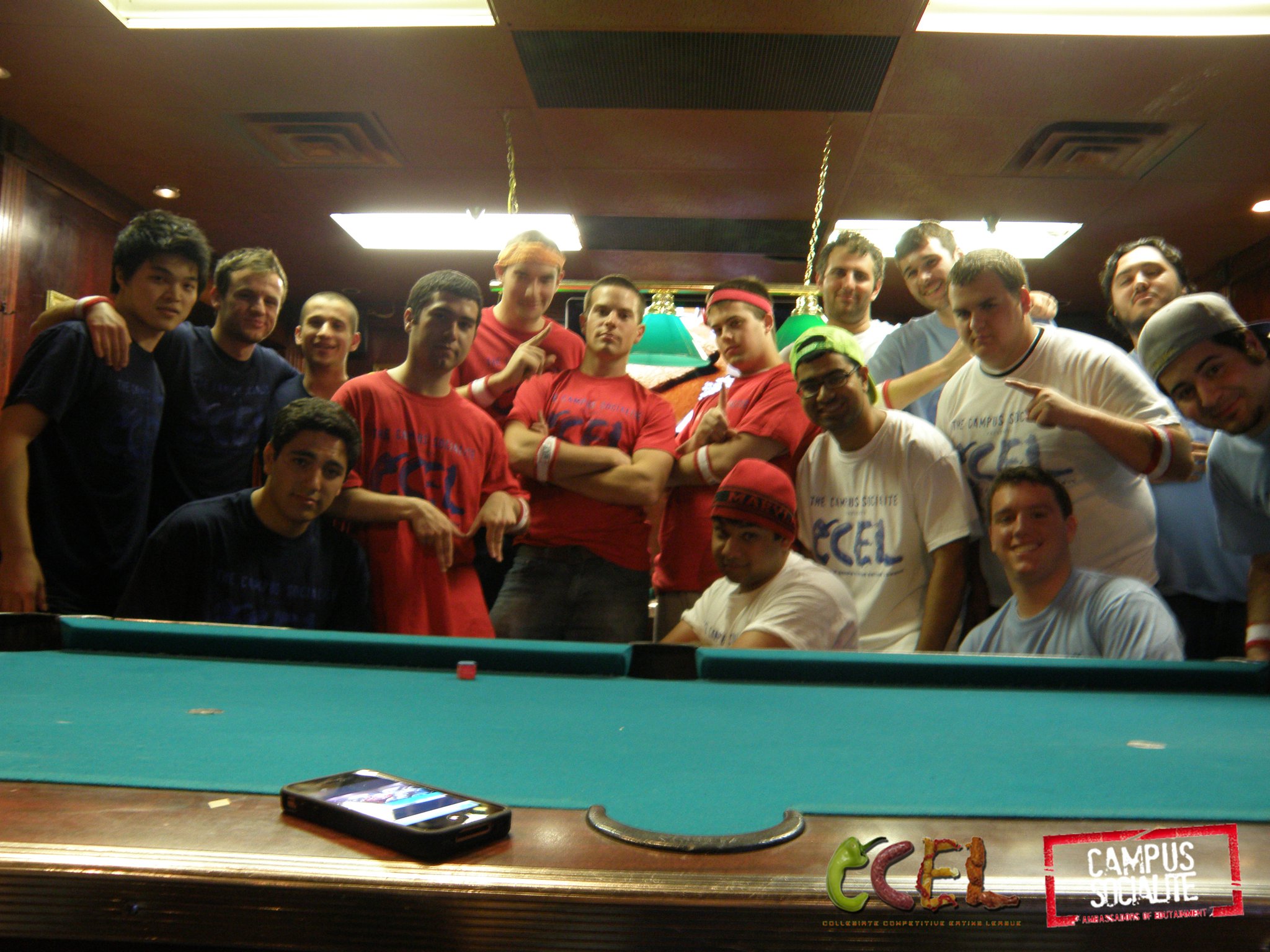 The competition drew 16 competitors to make up four teams of fierce college eaters.  Some with the experience of winning previous competitions and a reputation that proceeds. The navy blue CCEL team traveled all the way from NYC to represent the NYU team at the inaugural CCEL event.  The red team, whom we found out in the pre-game interviews was the odds on favorites, represented University of Maryland.  This team boasted two of the premiere college eaters, Ben “El Diablo” Kastner and Phil “The Fury” Fiore, the latter seemed to be the most targeted individual to overcome in the tournament.  The white team also represented the home turf University of Maryland and we’re there to prove they were no B squad. The light blue squad came from Long Island and Hofstra University to challenge the well known U of Maryland squads. 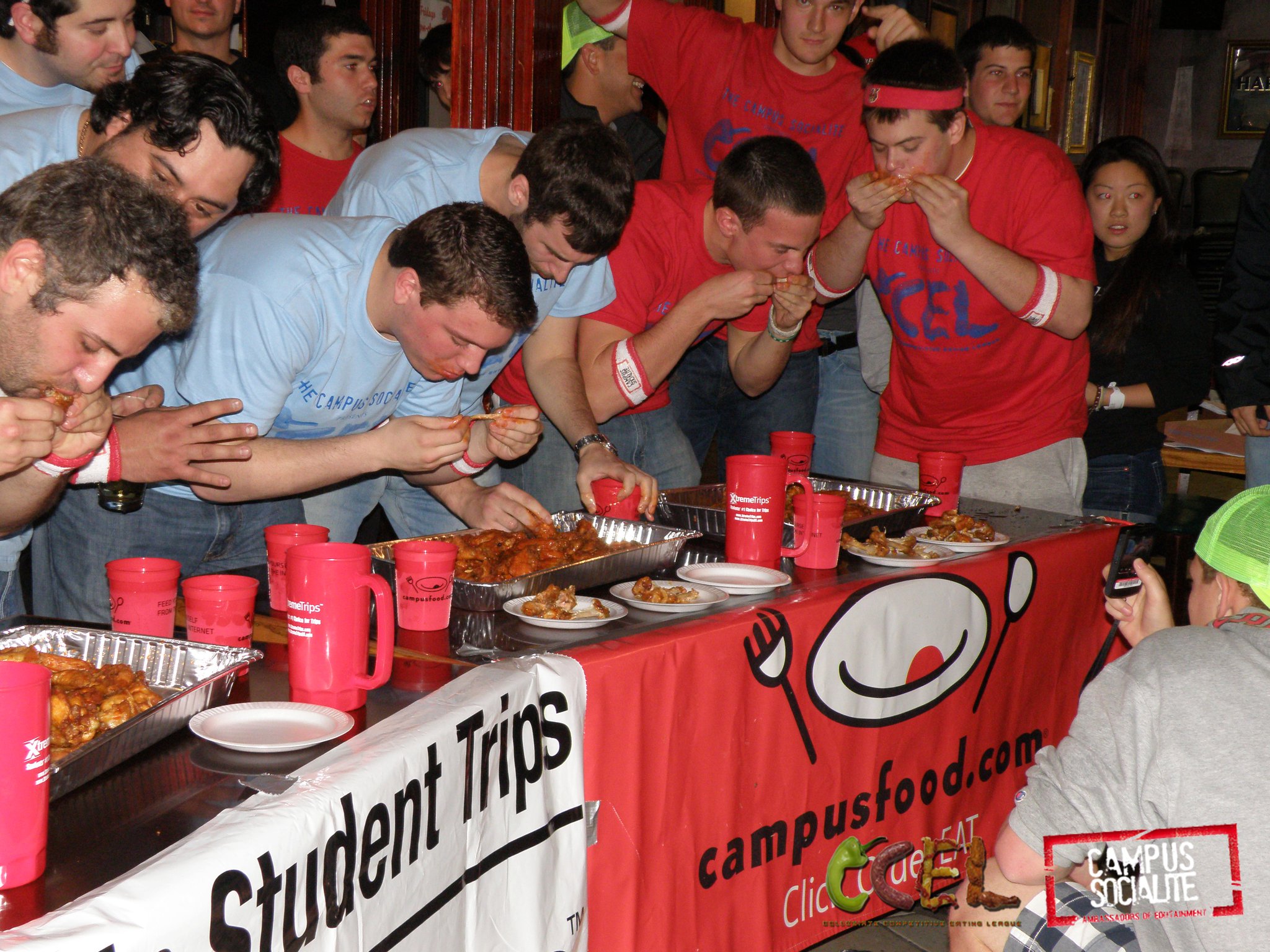 The first round of the competition included two members from each team with the tall task of finishing 80 wings in 10 minutes between the two team members.  Points were awarded in the order of speed of completion, and if teams did not complete in the allotted 10 minutes, the least amount wings left were awarded the next highest amount of points.  In this round we quickly found out why Ben Kastner is also known as “El Diablo” and that his pregame proclamations of being the most superior eater at the event, even better then his teammate and well-known collegiate eating champion Phil The Fury.  His Maryland team were the only squad to complete the full 80 wings in ten minutes in impressive and dominant fashion.  The Maryland 2nd squad came in 2nd place in this round, Hofstra came in 3rd place, and NYU came in 4th place, getting off to a slow start. 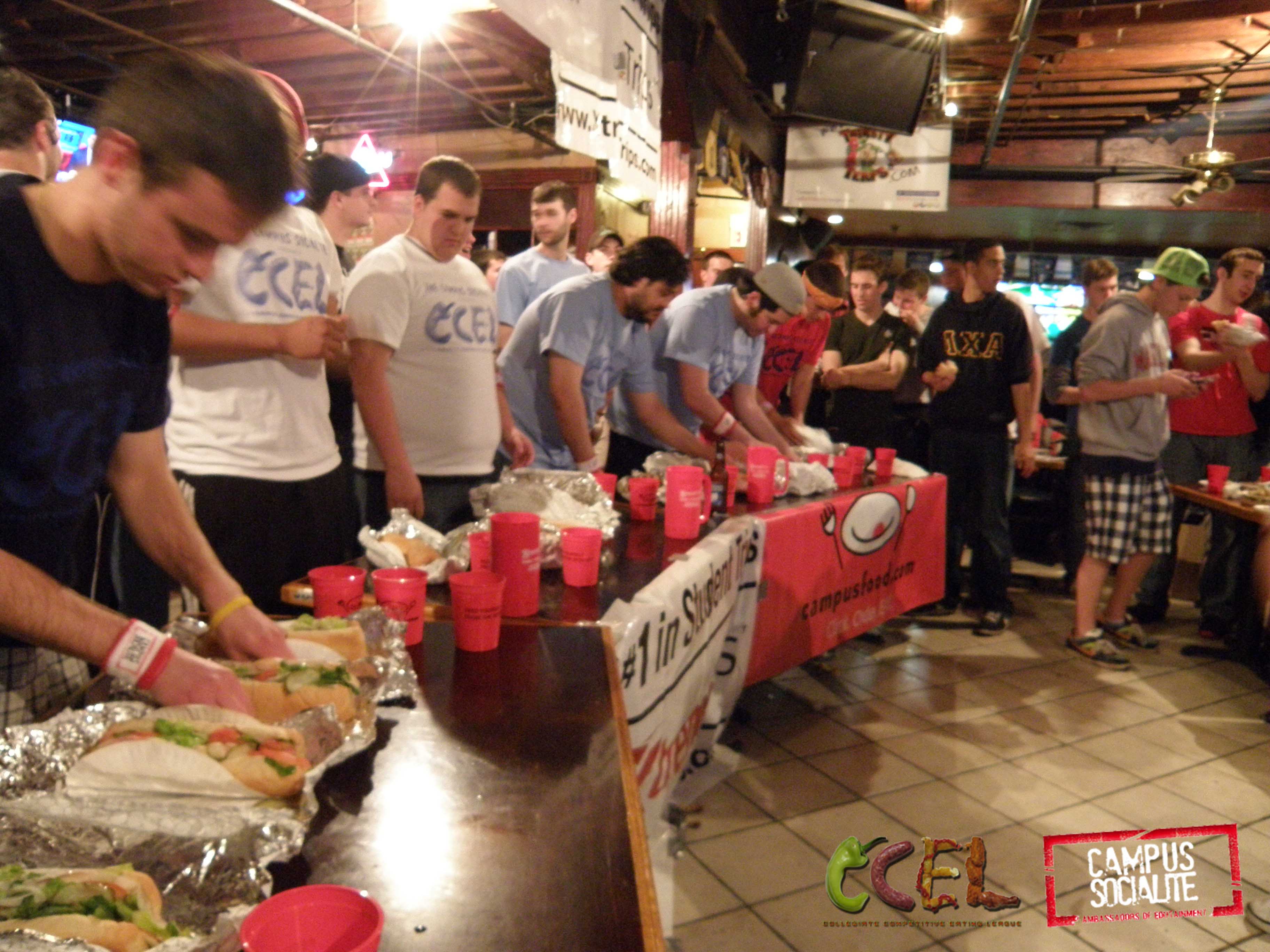 During round 2 of the competition the task again required two of the teams four members.  This time, the challenge was to eat 6 10 inch subs, 2 Turkey, 2 Ham & Cheese, and 2 Italian, again with a 10 minute time limit.  Yet again, only one team prevailed, and it was Maryland (1) wearing the red shirts.  This time the team was led by Bryan Lazzaro who was a little giant throughout the competition and Phil “The Fury”, who had his opportunity to show why he was deemed the #1 competitor in the tournament, stepping up for his team and eating four of the six sandwiches. 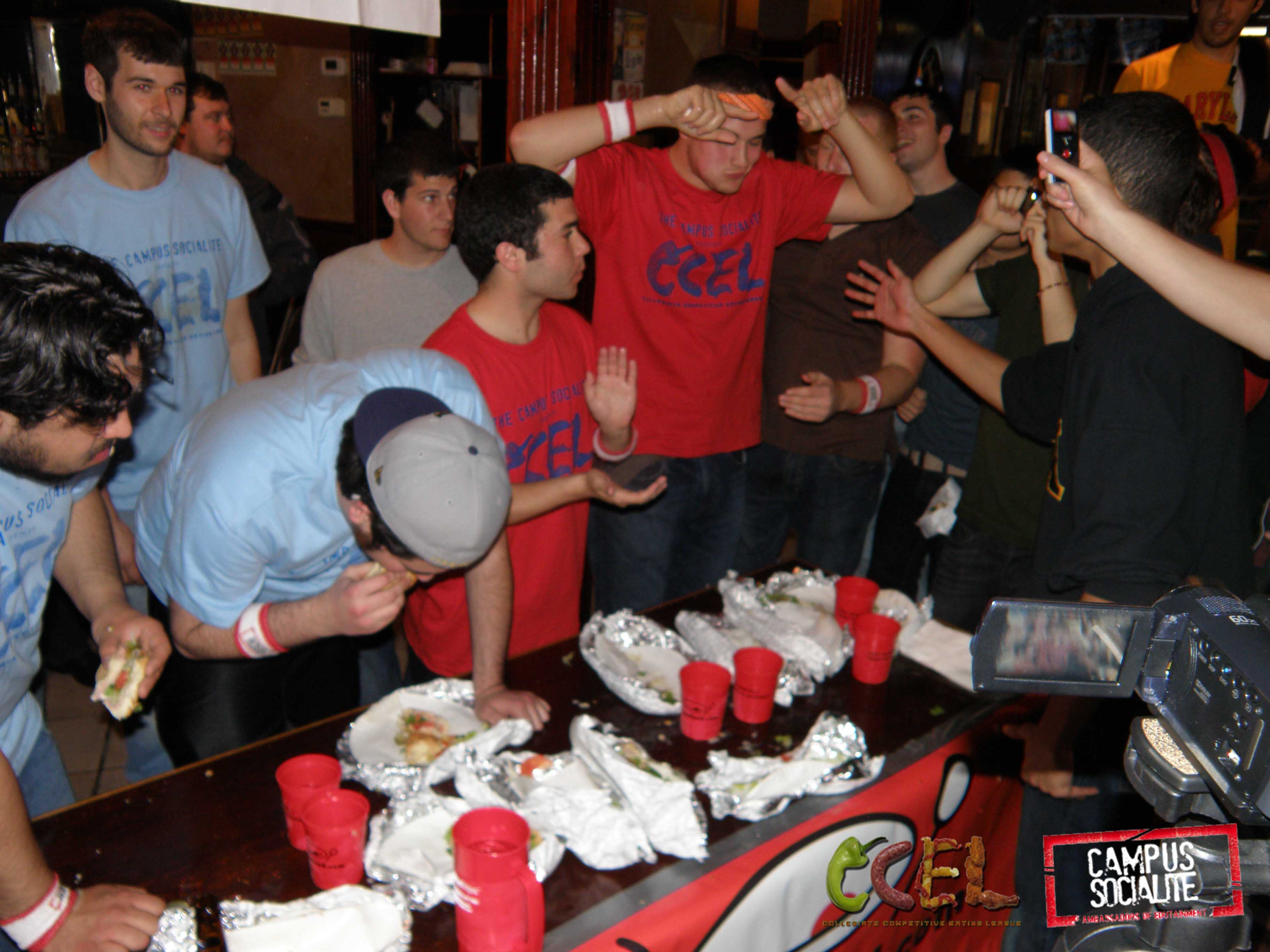 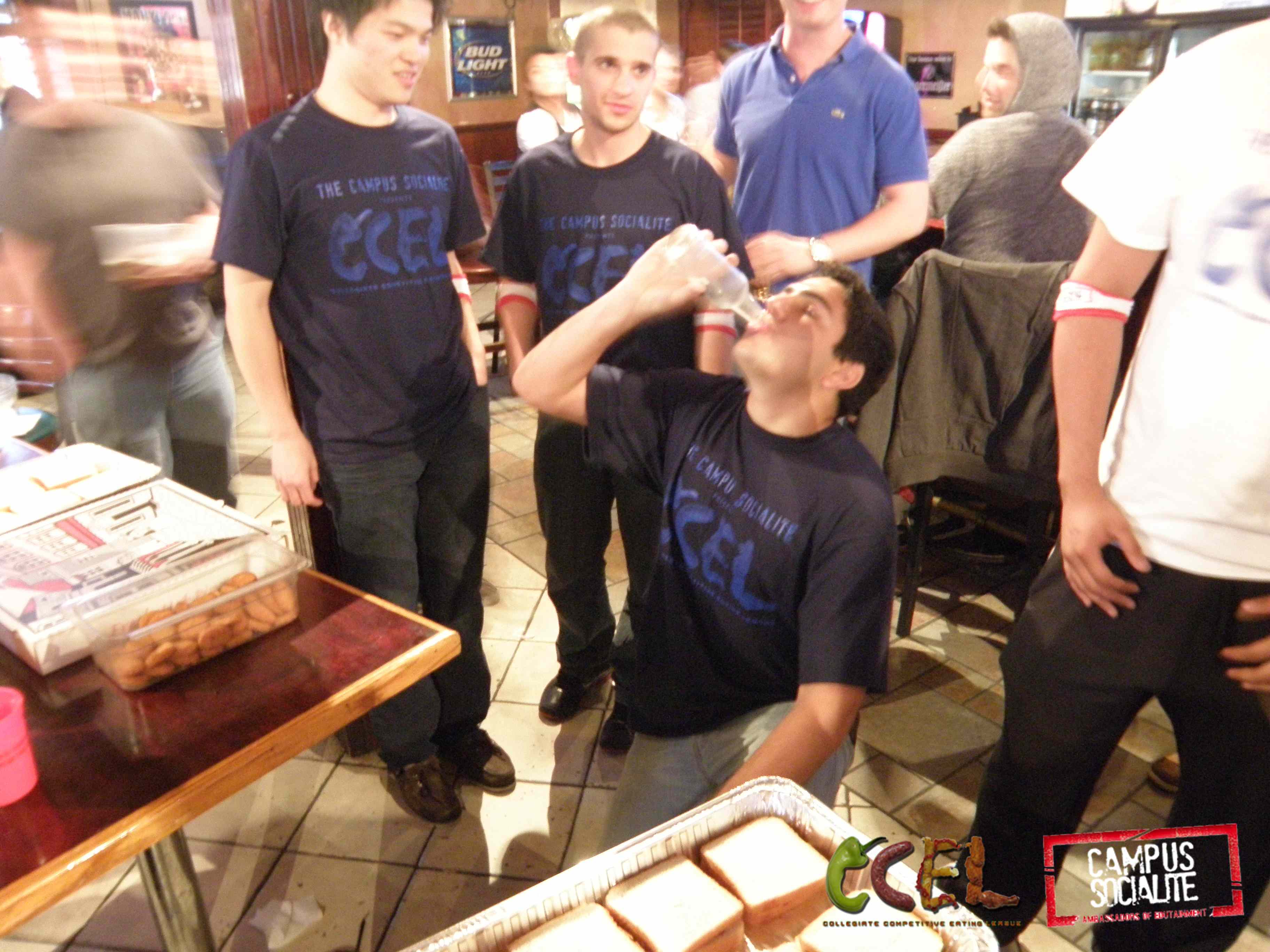 Greg, a member of the NYU team, was unfortunately “Iced” right before he was set to compete in the final round.  To say he was not happy about it would be an understatement, but the kid took it like a man, dropped to one knee, and housed that Smirnoff Ice. 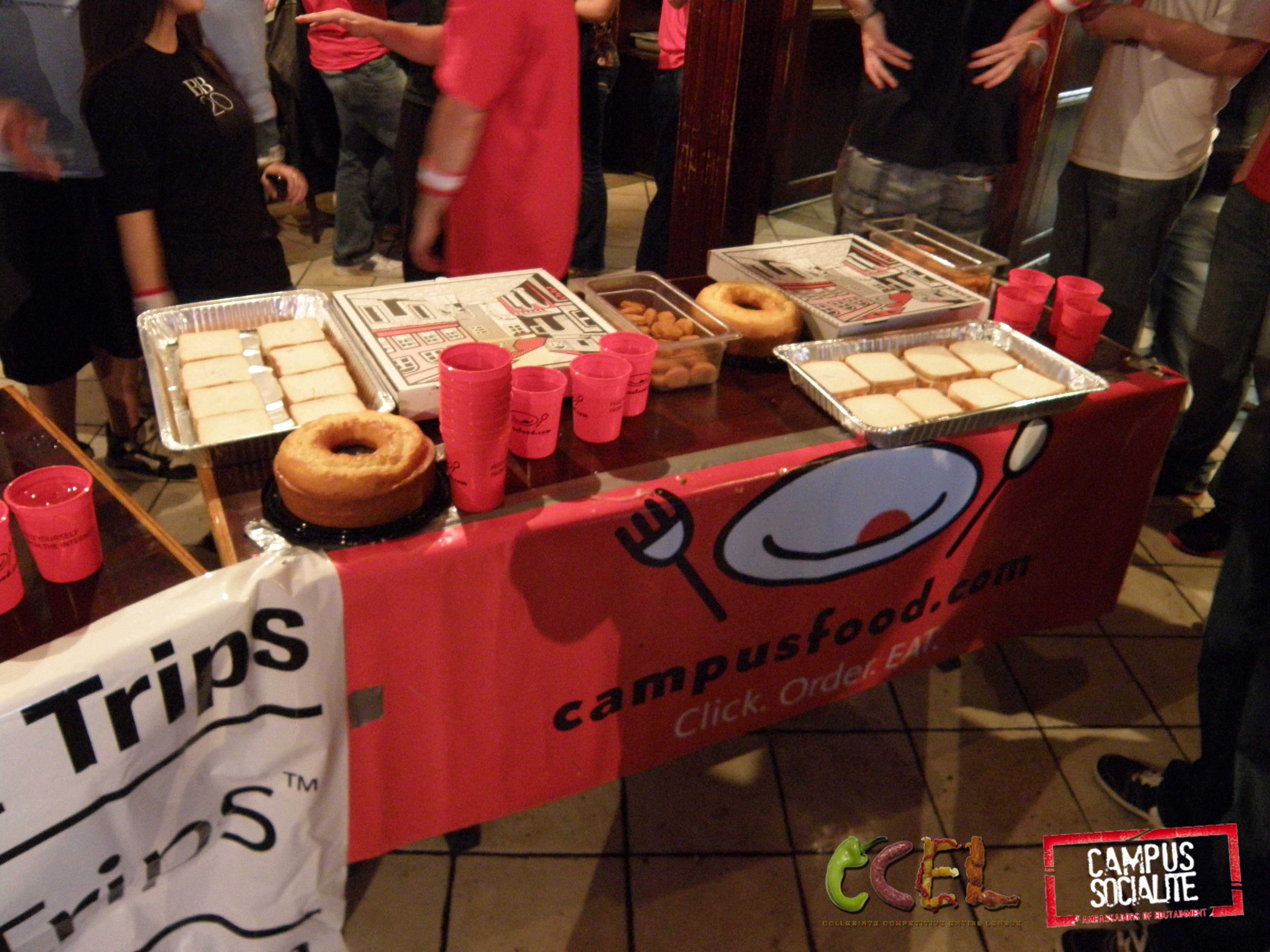 The final round was a daunting task, especially after the previously requested work the teams completed in rounds prior.  The final round was a WWE tag team style relay.  In front of each team stood a large pie of cheese pizza, eight peanut butter and jelly sandwiches, fifty chicken nuggets, and a full bunt cake.  The teams had 20 minutes to complete or finish as much food as they could.  This round was where things got messy.  Puking, sulking, sweating, all with a full crowded bar with over 100 other college students cheering their beloved eating heroes on loudly.

In this round Eugene Belkin of the NYU team helped to rally his troops and put up a serious challenge to the other three teams.  They were there to prove they didn’t drive all that distance just to admire the Maryland squad.  The Hofstra team starring Elan “Meatloaf” Saratovsky came out of the gates strong but quickly started to collapse as the pressure from the crowd started piling on. 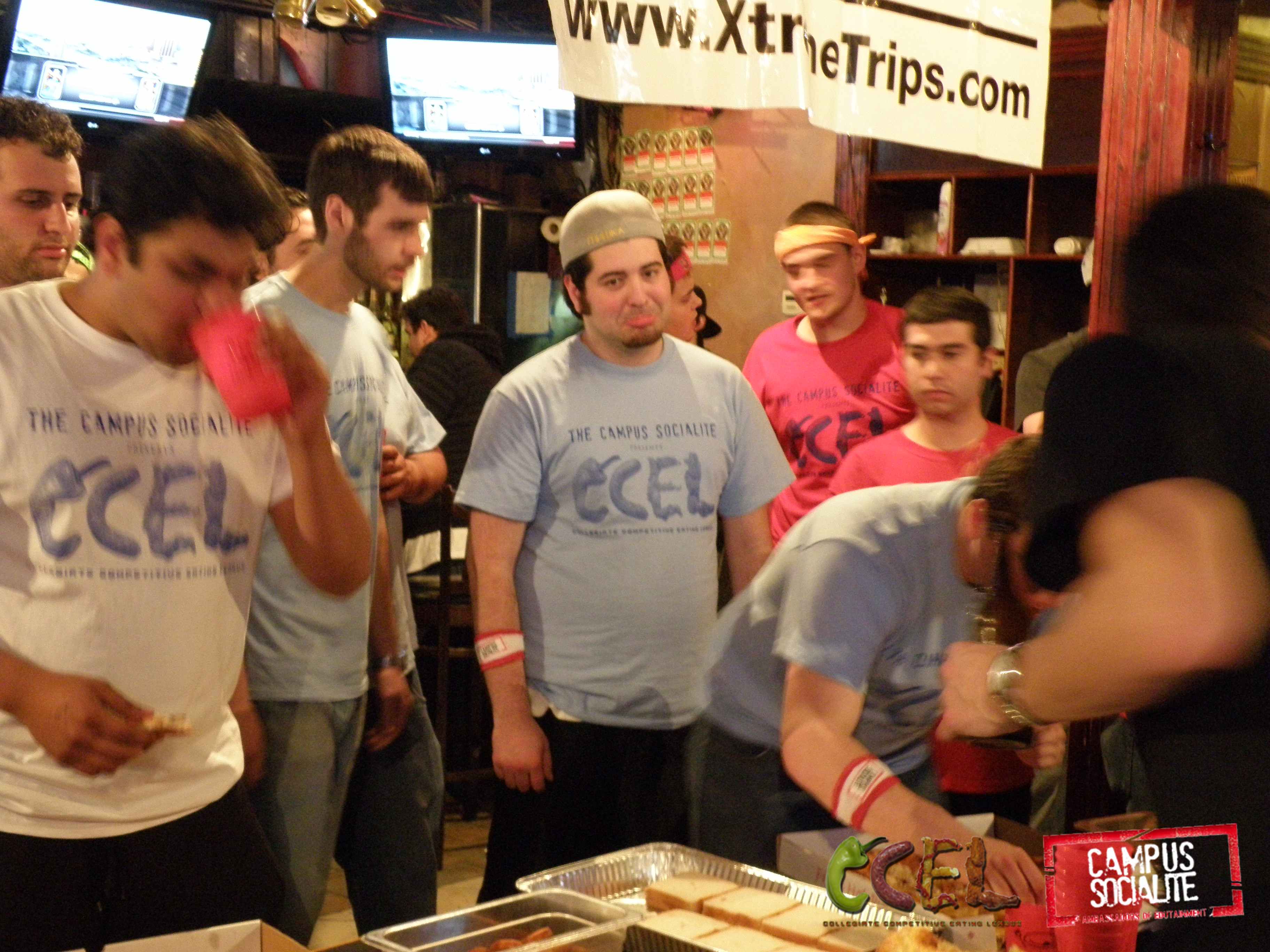 In the end, the Maryland (1) team remained consistent and built up an insurmountable lead during the final relay.  NYU and Maryland (2) battled for second place in a very close race, which ultimately was pulled out at the end by the NYU squad. 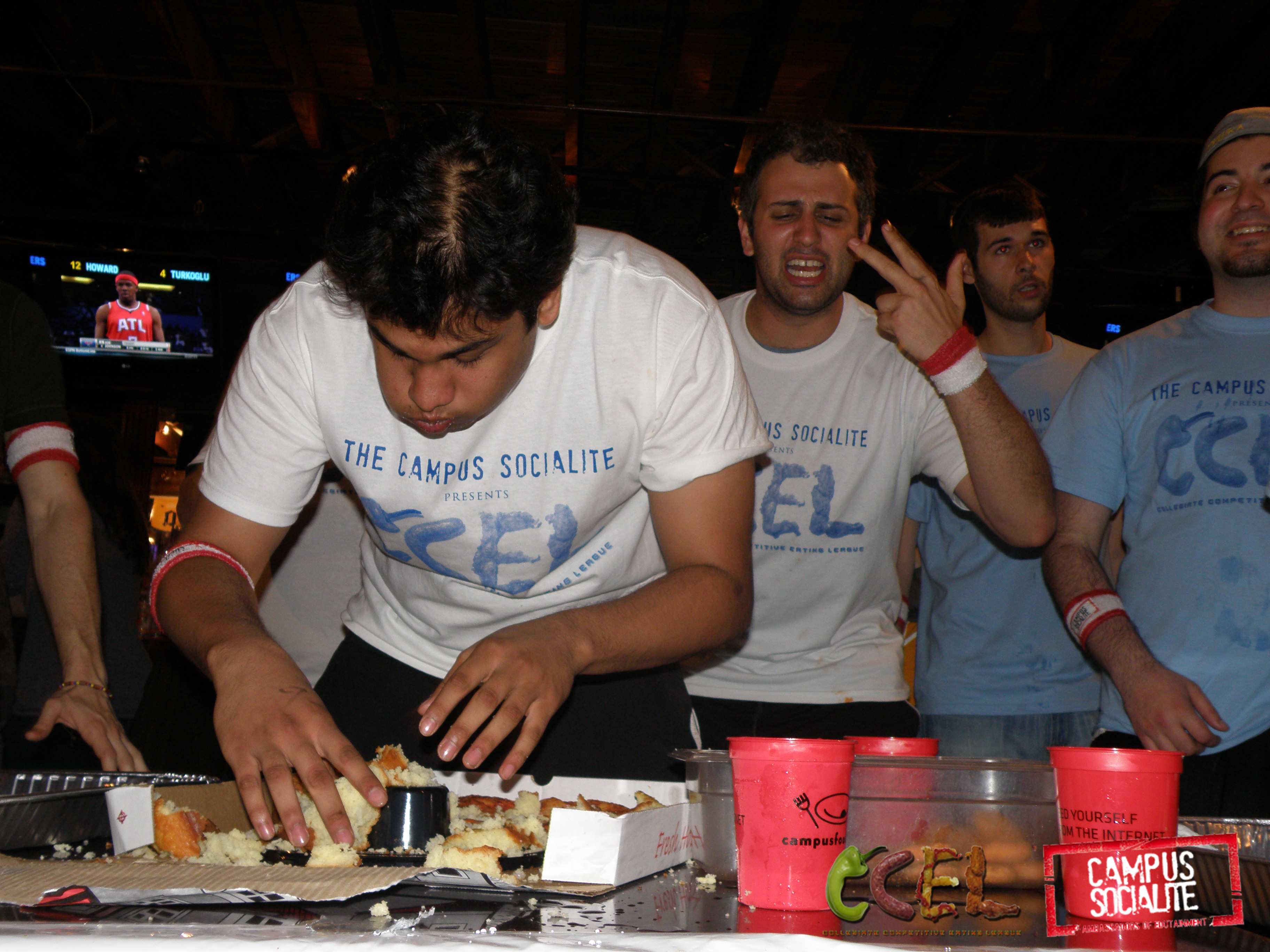 But the story of the day was the Maryland (1) team and their overall dominance.  They completed the three rounds of the first CCEL tournament undefeated, backing up all their pregame talk and then some.  The championship team received gift certificates from CampusFood.com as well as other prizes, but one award remained still up for grabs.  The CCEL MVE Award that is given to the Most Valuable Eater of the event.  This is not just a trophy or gift certificate, oh no, this my friends is a FREE SPRING BREAK TRIP in 2012 to PUNTA CANA! 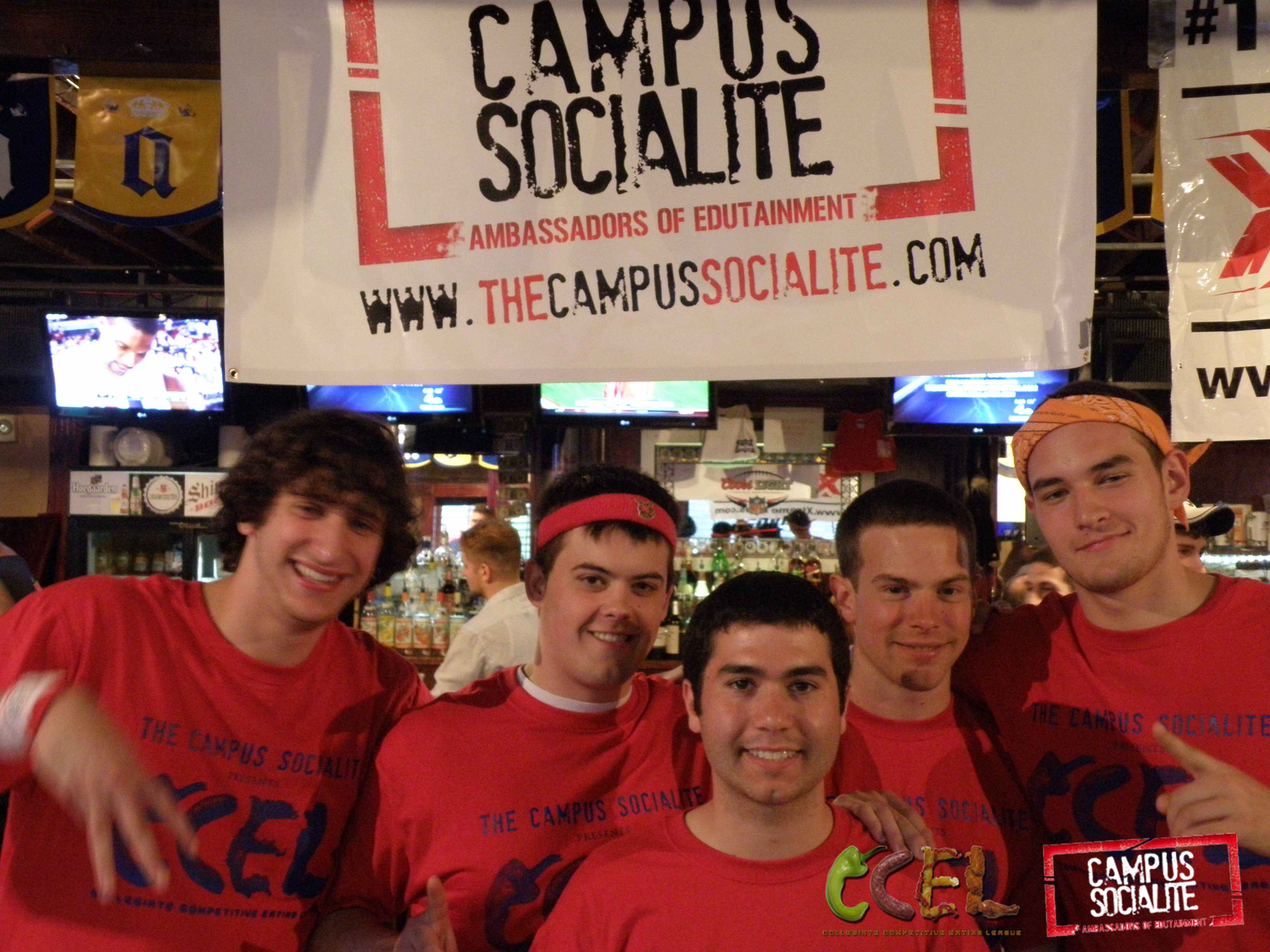 The MVE Award was going to be given to the top competitor of the day and there was two nominees for this extremely valuable award.  The decision was made to take the decision out of The Campus Socialite judges hands, but to put it in the hands, mouths and stomachs of the two college students that dominated above all others.  El Diablo vs. Phil The Fury for the MVE Award and it would be decided by a sandwich off.  These 2 students were 10 inches away from a FREE SPRING BREAK TRIP to PUNTA CANA, no homo. After a quick bathroom break for the competitors where they both probably puked out organs, they arrived back to the table for the final race of the evening.  The Fury was the obvious favorite, and most of the crowd expected him to be victorious again, but you could see in the eyes of El Diablo, he wasn’t going to roll over and allow the Fury to win the day.  After the crowd joined in on a C-C-E-L chant, the two of them went at it.  Phil got out to an early lead, but this one was back and forth.  Both of these guys looked like they have studied the sport, using techniques and strategies demonstrated by the professional greats like Kobayashi.  El Diablo buckled down, pushed, chewed and finished in first, upsetting the visibly angry Phil The Fury. 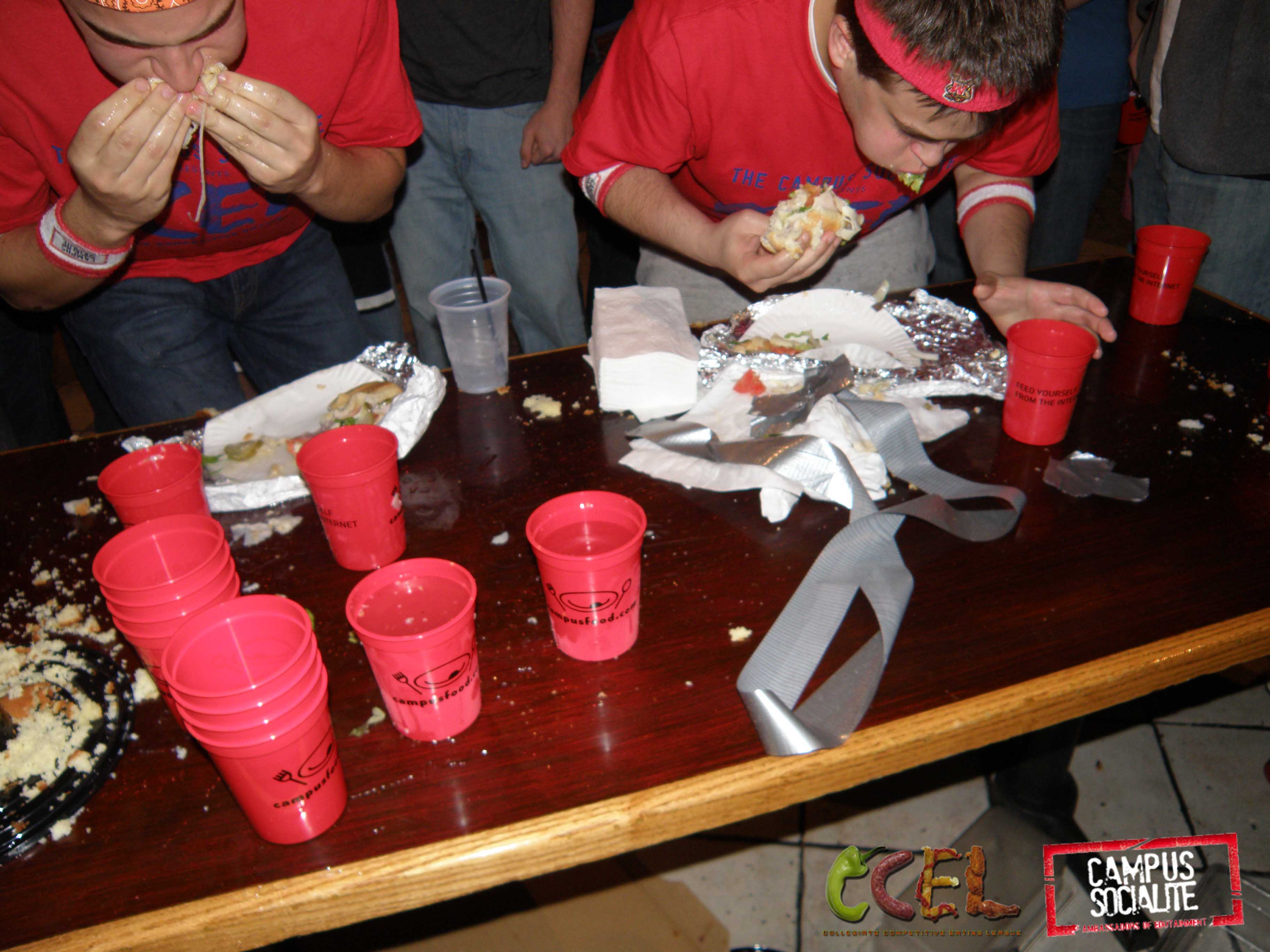 At the completion of the event, Xtreme Trips awarded Ben “El Diablo” Kastner his Free Spring Break Trip and raised his hand in triumph.  He did multiple interviews with the various press outlets that were in attendance and called out any future challengers to step up the table.  The event was a huge success for everyone involved as this was the beginning of University of Maryland’s college eating team and The Campus Socialite initiative to develop a league that becomes a nationwide phenomenon.  Keith Soloman and   College students from across the country have been reaching out to us to form their own teams and to take a shot at the champs.  Stay tuned for more footage from the events, get to know these student eaters, and find out more information as to where the next CCEL event will be held.

KNICKS VS. CELTICS: The Campus Socialite vs. Dueling Couches 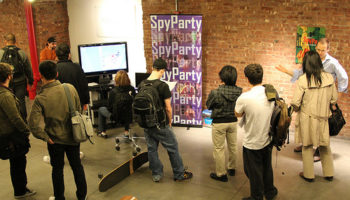 NYU Introduces MFA in Game Design, With a Focus on “Game Criticism” 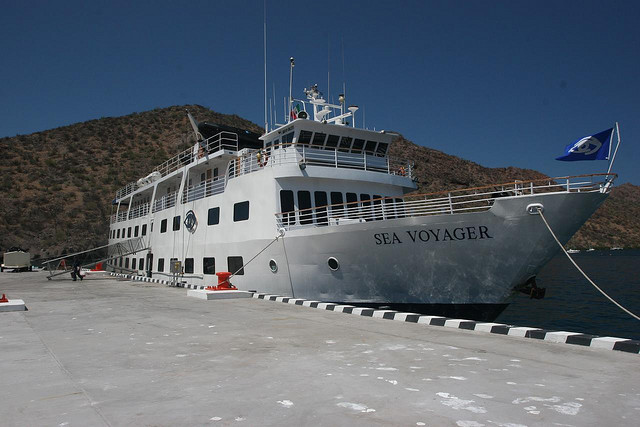