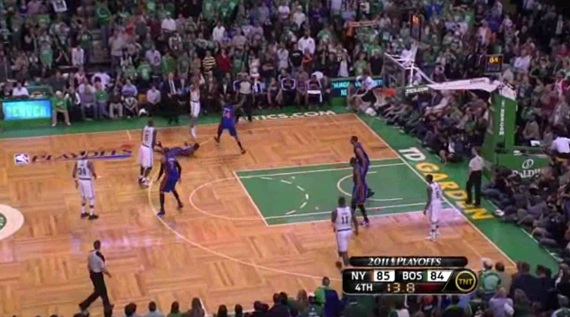 Ray Allen has buried countless opponents in the past with his deadly three point shooting. Chalk the 2011 Knicks up to his kill count. With 13 second to go, Allen nailed a three, giving the Celtics a 87-85 advantage. However, the play was definitely controversial. The Celtics used a Kevin Garnett screen on Toney Douglas to free up Allen. Ronny Turioff did not rotate quick enough to defend Allen, allowing him to knock down the triple. Now, Douglas fell down on the screen, which clearly seemed like a tripping foul. The question begs to be asked, were the Knicks robbed in Game 1?

Mike D’Antoni took exception to two plays that went against his team in the final 21 seconds of Sunday’s 87-85 loss to the Celtics in Game 1 of this first round series. The first was the offensive foul call that went against Carmelo Anthony, who was fighting for position with Paul Pierce in the left corner with 21 seconds left. The second one came on the ensuing possession, when it appeared Kevin Garnett set an illegal screen on Toney Douglas which freed up Ray Allen for the game-winning three-pointer.

“Well, in my eyes, I’m obviously biased,” said D’Antoni, who looked furious. “I thought [the offensive foul] was a tough call and I thought the call that Toney went flying trying to chase Ray Allen was a tough no-call. Those things happen. I’m not happy about it, but it happens.” 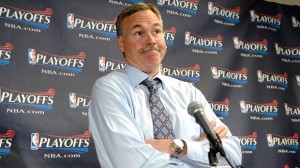 Within the last minute of the game, Carmelo Anthony was called on a very controversial offensive foul on Paul Pierce. The Knicks held a one-point lead and Anthony did not make a smart decision as he was jockeying for position. Carmelo also needs to realize that the refs will always tend to favor championship players on their home court. It’s not “fair”, but it’s human nature and it’s the NBA. While we are on this topic, Carmelo came up small in Game 1, shooting 5 for 18 from the field while committing five turnovers. He has got to pick it up for Game 2.

Overall, the Knicks played extremely hard on the defensive end, but failed to make a big play. The Celtics are going to get a call or two in their own building, but that’s basketball. The Knicks can expect the same thing when they come home for Game 3. (Please no more Rihanna ‘I’m Coming Home’ videos).

Knick fans, it’s time to move on. Yes, Toney Douglas was tripped on the Garnett screen, but the Knicks had an opportunity to tie or take the lead and failed to do so on the final possession. I’m concerned that the Knicks may come out a little flat tomorrow night, especially with the injury to Chauncey Billups and draining Game 1 loss. If the Knicks want to make a series out of this, they need to take Game 2. Until then, let Game 1 go, tip your hat to Ray Allen and get ready for tonight.

D’Antoni was in an ornery mood after the game and showed a much more defiant side of him we rarely, if ever, saw during the regular season. For instance, while he would normally downplay trash talking and things said by opposing players, D’Antoni unsolicited made reference to Glen Davis’ shot at Amar’e Stoudemire, Davis said “It’s really not that hard” to defend Stoudemire, when he talked about the monster game Stoudemire had.

“Amar’e was dominant,” D’Antoni said. “Somebody said something that he’s not as good as he was. I don’t remember somebody saying something like that, but anyway, he’s pretty good.”

You Know You’re In College When…