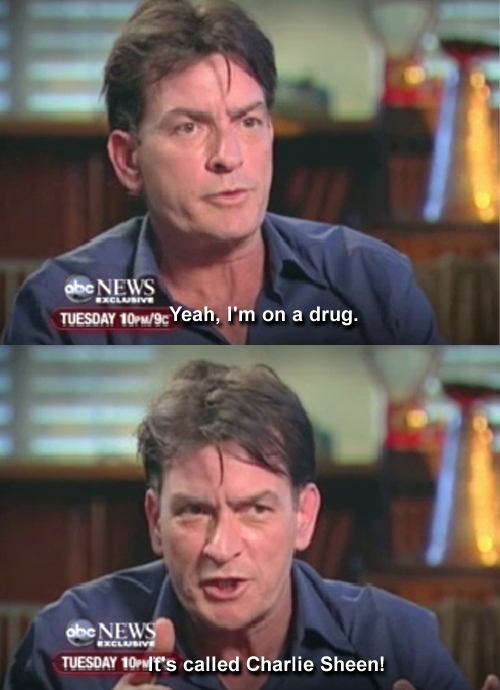 Because of Charlie Sheen’s not-so-candid interviews with the press, and recent binge of stupidity, I decided to take a look into some of the most prominent, and most outrageous celebrity meltdowns. From shaving their heads in a tattoo parlor, to passing out in their neighbor’s home, maybe these celebrities were all just high on the drug “Charlie Sheen” too. 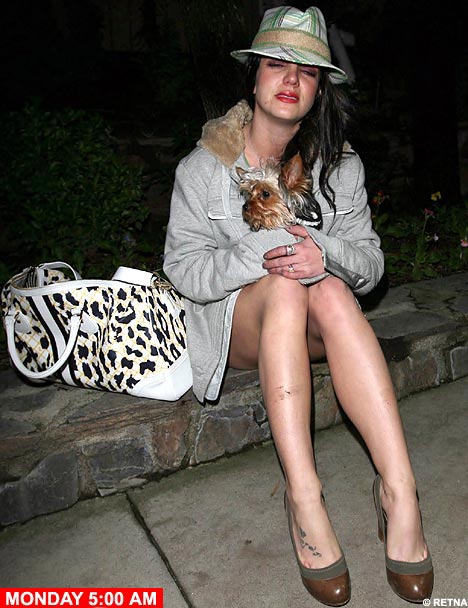 We all knew Britney was a little crazy after she married her childhood friend in Las Vegas, and then had the marriage annulled just 55 hours later. But it wasn’t until her divorce from second husband Kevin Federline, that we got to see Britney fly her crazy flag higher than any psychotic celebrity could dream of. The pair had two children together, but divorced (apparently Britney texted him the night before saying it was over) in 2007. Following the divorce, Spears was photographed sans panties, and partying with Paris Hilton and Lindsay Lohan (never a good idea). This was the start of the erratic party-girl behavior  that eventually became a serious problem for her family, her reputation, and her fans. 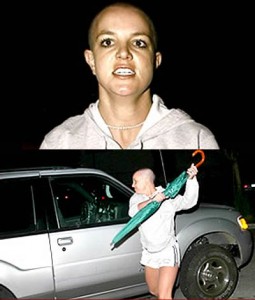 It wasn’t until the infamous night she walked into a tattoo parlor and shaved her head, did her fans, her family, and the media realize something was seriously wrong. The day after shaving her head, and attacking a paparazzo’s car with an umbrella, Spears checked into Promises rehab center in Malibu. Soon after her return from rehab, her ex-husband, Kevin Federline, sued for primary physical and legal custody of their two kids. 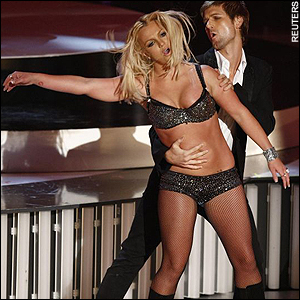 Now eager to let the world see her “comeback”,  Spears’ performed her new single “Gimme More” at the 2007 VMA’s. In her heavily criticized return to the stage, she seems dazed and confused, and put on a performance that solidified the fact that the old Britney was long gone. In the next three months, Spears was asked to undergo drug testing, and her time with her children was monitored by child protective services. 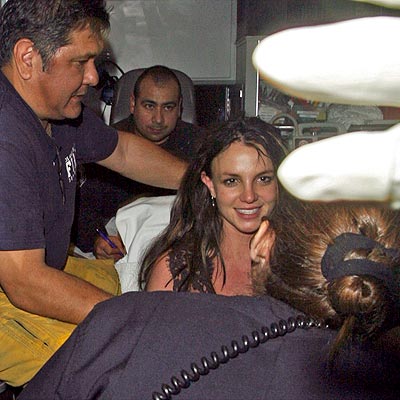 On January 31, just weeks after Spears’ custody is taken away, emergency medical services are called to her home, she is taken to UCLA Medical Center to “get help”, and is placed under a medical evaluation hold. It is then reported that her father will take over as conservator of her estate, and handle her finances, career, and decision-making.

Her father still holds power of her estate, but Federline and Britney now share custody of their children. Britney seems to have gotten it together, but I think it’s safe to say her sex-kitten “Slave 4 U” days are over. 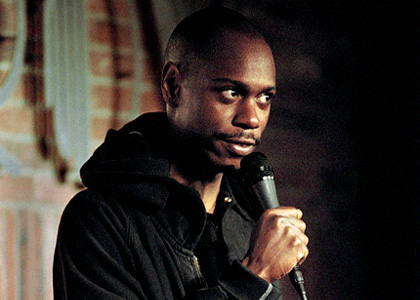 In 2005, Dave Chappelle was the comedian on everyone’s mind. That is until he lost his mind. After signing a two-year $50 million deal with Comedy Central for his sketch-comedy show “The Chapelle Show”, the comedian disappeared. It was reported that Chapelle was “stressed out” about the direction of the show, and retreated to South Africa to clear his head.

After reports surfaced that he checked into a mental rehab facility, Chapelle shot them down, saying he went to one 40-minute session, and was just there to relax. “The Chapelle Show” was later canceled, and the comedian hasn’t produced any original programming since. 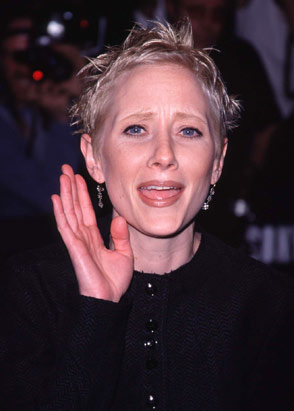 The actress and former girlfriend of Ellen DeGeneres, had a brief visit from her good friend crazy (or allegedly Ecstasy as was reported in the press) in 2000. Heche, who had just broken up with DeGeneres the day before, knocked on a stranger’s door in Fresno, CA wearing only a bra and shorts, and politely asked to take a shower.

Heche continued to make herself at home in the stranger’s house, and the police were called. When police arrived, Heche explained she was God and she could take them all back to Heaven in her spaceship. In her book “Call Me Crazy,” Heche opens up about her abuse from her father at a young age, which caused her to create her alter-ego, Celestia. Celestia was described by Heche as a “daughter of God, half-sibling of Christ, and that she was to spread a message of love to this stricken planet before ascending into Heaven.”

Heche is now no longer a lesbian, and has a son with actor James Tupper.

Whitney’s good girl image began to crumble when her unpredictable behavior caused her to lose gigs, arrive late for appearances, and cancel scheduled interviews and performances. In early 2000, Houston and her husband Bobby Brown were both caught with marijuana in their luggage, while trying to fly to Florida. The couple evaded authorities by boarding the plane before they arrived, and the charges were later dropped. But the public recognized a change in Houston, with her dramatic weight-loss and disconcerting behavior. In an interview with Diane Sawyer in 2002, Houston confessed to using drugs but denied using crack. 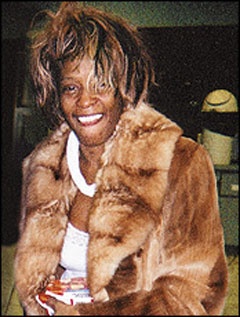 “First of all, let’s get one thing straight. Crack is cheap. I make too much money to ever smoke crack. Let’s get that straight. Okay? We don’t do crack. We don’t do that. Crack is wack,” said Houston in the interview.

Two years later in 2004, Houston and Brown starred in their own reality show that was collectively slammed by critics, noting both Brown and Houston’s disturbingly bizarre behavior. Brown and Houston divorced in 2007, but recent reports say the two are attempting to reconcile for their daughter. 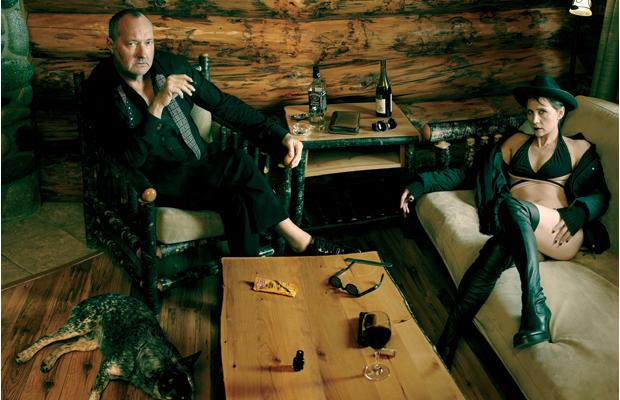 Best known for his role as Uncle Eddie in the “National Lampoon” movies, Randy Quaid is an actor, and as of late, a certified crazy person. In 2009, Quaid and his wife were arrested for defrauding an innkeeper, after reportedly owing $10,000 to a California hotel. After missing their court dates and trying to settle out of court, Quaid’s charges were dismissed, but his wife Evi, was given probation and community service. 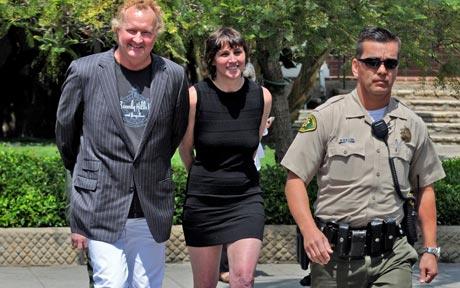 But that’s not even the worst of it. In 2010, the Quaid’s faced burglary charges after continuing to live in a guesthouse on the property of a home they no longer owned. When police confronted them, they said it was their house, but the current owner produced paperwork that proved he bought the house from the Quaid’s back in 2007. Bail was set at $50,000 for each of them, and after their release, the Quaid’s once again failed to show up for court.

But this time, the reason they didn’t show up was because they were fleeing to Canada. They have since applied for refugee status, because they are convinced that the “Hollywood Star Whackers” are out to find them and kill them. Unable to pay the deposit requested by Canadian officials, the couple is on the run, living in their car, and keeping a low profile in Canada. 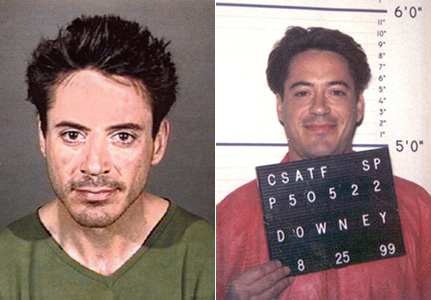 Robert Downey Junior may be one of Hollywood’s hottest actors right now, but he had to change his life to get to where he is today. RDJ is a former drug-addict who says he began taking drugs at just 8-years-old because his father gave them to him. In 1996, he was arrested for possession of heroin, cocaine, and an unloaded handgun, after being pulled over for speeding down Sunset Boulevard. Just a month after his arrest, Downey was found in a neighbor’s home, sleeping in one of their beds, and obviously under the influence of a controlled substance. After this mishap, he was given three years probation, plus mandatory and frequent court-ordered drug tests. 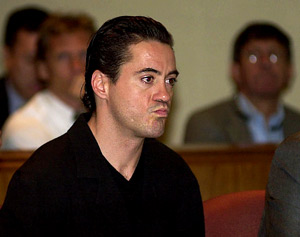 When RDJ missed two scheduled drug tests, he was arrested and sent to the California State Substance Abuse Facility, and State Prison for a year. When he was released in 2000, he was cast in “Ally McBeal”, increased the ratings, and earned an Emmy Award for his role. But on Thanksgiving 2000, he was found to be in possession of cocaine and valium in a hotel room in Palm Springs. RDJ was later fired from “Ally McBeal” after he was arrested in Culver City, CA for being under the influence while on parole for his Thanksgiving arrest.

After his final arrest in April 2001, RDJ was sent to rehab and given three years probation. This time it finally seemed to work, and RDJ kicked his habit and got his career back on track, now starring in franchises like “Iron Man” and Sherlock Holmes.”

The Campus Tycoon: How to Become a College Student Movie Producer