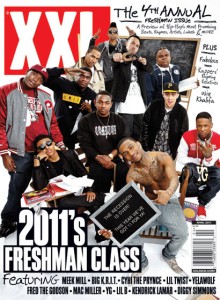 So earlier this week, rap’s biggest publication was forced to spill the beans about their 4th annual list of this year’s hip hop hopefuls due to the cover being leaked a month early by T-shirt company, Eighty8 Clothing. As I was very excited and anxious to see who made the cut, I quickly became disappointed after viewing the “chosen ones.” In the last three editions of the freshman class, XXL has only selected ten up-and-coming artists. And usually the majority of the choices made sense. However, for some reason, this year, they have decided to feature 11 students of the game; go figure. Maybe because it’s 2011, so 11 artists. Who knows? I do know for sure that it couldn’t have been because XXL couldn’t decide on just 10 MCs and said, “Fuck it, they are all so talented, we’ll just put them all on the cover.” Nevertheless, the magazine highlights Kendrick Lamar, Meek Mill, Big K.R.I.T., CyHi Da Prince, Yelawolf, and Lil Twist, Fred the Godson, YG, Mac Miller, Lil B and Diggy Simmons. 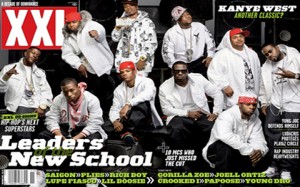 Freshmen that should graduate

Even though I’m unhappy with the results of the 2011 underclassmen, I still think there’s some light at the end of the tunnel for a few of these rap whippersnappers. The fact that talented lyricist Kendrick Lamar is featured in my Breakthrough artists of 2011 series, along with major co-signs from Dr. Dre and J. Cole, is evident enough that he will go far in this game. I predict he will be signed to a major label soon. Big K.R.I.T., reppin’ Mississippi and being a rapper/producer with a critically acclaimed mixtape, K.R.I.T. Wuz Here, is someone who will do big things for the south. Yelowolf, now being part of Shady Records (Eminem’s label) and gracing XXL’s cover for two consecutive months, illustrates that the white boy from Alabama is set to move up rather quickly in the world of hip hop. Mac Miller, with a colt following like his fellow Pittsburg native Wiz Khalifa and creating a lane of his own, is another white guy who will eventually do damage mainstream. Having a pops as a hip hop legend did not make Diggy Simmons a shoe-in for his acceptance letter to XXL’s freshmen class. However, his deal with Atlantic Records and two solid mixtapes, The First Flight and Airborne, did. 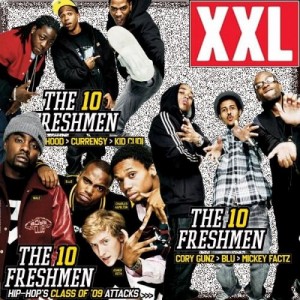 These are the MCs who I believe have a fighting chance of making it as upperclassmen. The others on this cover could make it, but most likely will never reach the same height of popularity or buzz that they are currently at. It’s the gift and curse of being on the XXL freshmen cover. Some will rise to the occasion and graduate while others will drop out and will never be seen again. Just check out some of the previous year’s picks and see who didnt live up to the hype. Only time will tell for the new recruits. Who do you think will make it? Or more importantly, who do you think was a waste of cover space? 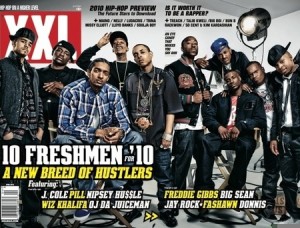