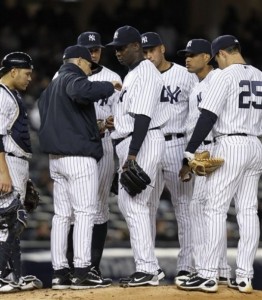 It’s baseball season and for Yankee fans, what’s better than watching your rival, the Boston Red Sox, start off the season 0-4. I’m sure Boston fans were laughing last night when the Yankees so-called extraordinary bullpen blew a 4 run lead in the 8th inning. Many of you saw the Yankees bullpen collapse in the eighth inning against the Twins last night. I was left dumbfounded when the eighth inning began. I was fine with Joe Girardi yanking CC Sabathia after seven innings of two-hit ball. His pitch count was at 105 and it was a very cold and windy April night. No need to push him when the Yankees held a four-run advantage. However, what I didn’t understand was Girardi’s bullpen selections.

With the Yankees holding a four run lead with the bottom of the Minnesota order due up, Girardi called on Rafael Soriano. Soriano, who threw an inning yesterday and has stated that he needs time for his velocity to catch up, allowed four of his six runners to reach base (three via walks). After Soriano walked in a run, Girardi brought David Robertson (who I thought should have started the inning) in the game.

Girardi has had Robertson warm up in all five games thus far, but has only appeared in one. Everyone knows that Robertson has very high strikeout propensity, but Girardi doesn’t trust him for some reason if he’s giving to the ball to Soriano in these situations. One could argue about Robertson’s ability to strike out a hitter in a big spot, but he would have cruised through the bottom of the Twinkie order. Delmon Young made the Yankees and Robertson pay with a well-placed bloop three-run double to tie the score at 4.

I’m not going to sit here and make excuses for Soriano. He is getting paid over $12 million to relieve baseball games, he saved the most games in the American League last season, and pitching on back-to-back days should be a huge feat for any reliever. However, this just wasn’t his spot tonight. With a lead of three-runs or less, then I can understanding using Soriano. Add in the weaker lineup that was due up in the eighth inning and it’s even more of head scratcher.

For fun here is Soriano’s pitch Fx that my friend made from last night. 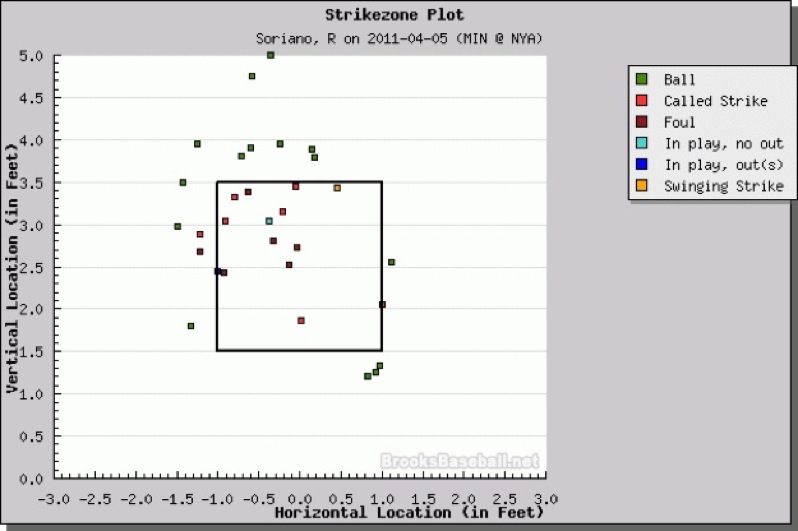 As you can see, Soriano was missing up in the zone and only recorded one swinging strike. Not exactly what you were hoping for after he posted a very impressive season last year as Tampa Bay’s closer. Soriano will have more happenings like this one, but don’t expect them to happen too often.

Going forward, I’d like to see Manager Joe Girardi show more faith in David Robertson. Robertson can strike people out and has a strong presence on the rubber. The Yankees better get the bullpen figured out fast; their series with Boston begins this weekend.