As Phil Mickelson walked up to the 18th green at Augusta on Sunday he knew he was on his way to his 3rd Masters win becoming only the 7th person to ever accomplish such a feat.  Maybe more importantly than the win he knew what was waiting for him at that same green:  his wife Amy.

Last May, his wife Amy was diagnosed with breast cancer and Phil decided that he would take some time away from golf to spend time with his family and stand by his wife’s side through her battle.  Only two months later his mother was also diagnosed with cancer.  With his world seeming to fall apart he was told that both the women in his life should survive after what would be difficult months.  He returned to golf shortly after with the support of his fellow golfers and what seemed to be every fan on the courses he played.

Phil is the ultimate family man and fan favorite.  The guy is a class act who takes time off to be with his family while they tried to heal and move forward.  At every course if you watch Phil he is fist pumping every fan that sticks their hand out.  Constantly giving the thumbs up and tipping of the hat.  You never see Lefty throwing his club, or cursing, or screaming.

As Tiger Woods came to the 18th green at Augusta on Sunday he tipped his hat and smiled at the crowed and had a look of disappointment on his face.

Tiger came into this tournament after a hiatus from golf after spending time with, well not his wife, more like 16 or so whores, models, home wreckers etc.  It took a 9 iron to his skull before he realized or pretended to realize that he may have a problem.  He now has been in sex rehab (when did this become popular?) and lost most of his major sponsors.  However, when he started his tournament on Thursday he was the one everyone wanted to see win and flash that million dollar golden shower smile on Sunday.  This guy wants to know why?

I don’t know about everyone else but I am the guy who was rooting for the family man not the sexting magician.  What kind of society do we live in that we would rather see the cheater over the class act?  Now I know many people were pulling for the lovable lefty just like me and for us all weekend we were waiting for the other shoe to drop.

See rooting for the Lefty at times is like rooting for the Chicago Cubs, as close as they get it is just a matter of time until some sort of implosion.  All of us in Phil’s corner or those who love golf remember the ’06 Open at Winged Foot where he had a 2 stroke lead with two holes left to play and inexcusably pulled out a driver and put it somewhere over the beer courtesy tent.  Or even last year at the U.S. Open where everyone was behind Phil and he had the lead before bogeying two of the last four holes to finish once again in second place.

This week however it seemed a little different.  All week he was right in the mix and when heading to the 13th tee on Saturday, Phil’s old buddy Fred Couples gave him some words of wisdom: “better get it going.”  When he entered the par 5 13th off the lead by five shots, magic happened for Lefty.  He eagled 13, then on 14 put a 140-yard shot into the hole for a second eagle in a row and on 15 put his would be 3rd eagle in a row within 3 inches of the pin and made his birdie.  Just like that Phil was tied for the lead, and would end the day one back going into the final round.  On Sunday Phil looked calm and cool and made it through the front 9 tied for the lead and that where the implosion almost took place.  On 10 he put his tee in the woods but bounced back to save par and on 13 after he took the outright lead he put his drive behind on tree.  That is when all us Phil fans knew this tournament was going to be different.  He hit a remarkable shot to get a birdie and all but solidify his green jacket.

All of this happened while Tiger had a less than stellar Sunday performance spending much of the time throwing clubs and screaming at himself.  Now I am not saying I will never root for Tiger, but maybe this weekend was a little too soon for him to retake his throne.  Tiger – it is your time to suffer, it is your time to look up and see the ass of a champion.  Maybe your best bet is to start acting like the family man, the Loveable Lefty.  Maybe it is Phil’s time to reign.  The Loveable Lefty who respects the game and the fans.  If you’re not a Phil fan maybe now is the time to jump on the bandwagon because it’s his time! 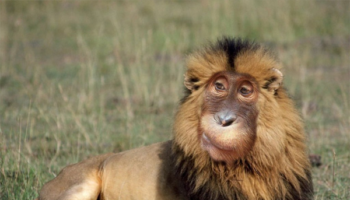