Bad news for Jersey Shore fans: the cast’s flight to Italy has been delayed. Producers planned to film our favorite fake Italians partying it up for a month and a half in Florence, Italy. The cast, who was supposed to leave this past weekend from Newark, NJ airport, hardly made it past security before being stopped by MTV producers. 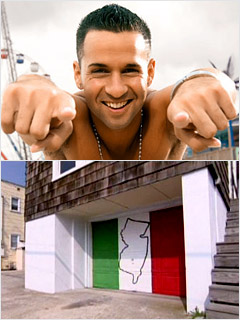 Permits to film at historical landmarks all over Florence were revoked due to the potential trouble that follows the Jersey Shore crew. In fact, Florence Mayor Matteo Renzi had banned the cast from filming anything at Florence bars, clubs or any other place that could possibly give the city a “bad name.” The cast was also banned from being filmed publicly while drinking.

Sorry viewers, but who knows when your favorite fake, drunk, wannabe Italians are going to be filmed again for season four of Jersey Shore.

We will continue to keep you posted on the latest news of your favorite orange freaks!