Lil Wayne To Be Released From Prison Tomorrow 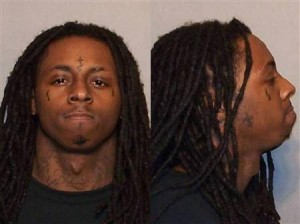 After spending the last eight months in the clink, Rapper Lil’ Wayne will be a free man tomorrow. Weezy has been locked up since March 9, due to his 2007 arrest for criminal possession of an illegal, loaded 40-caliber Taurus handgun. Police searched Weezy’s tour bus after a concert in New York because they could smell marijuana smoke and found the gun, and a passenger (not Weezy) trying to flush half a pound of weed down the toilet.

Lil’ Wayne has served his time at New York’s Rikers Island prison and for the last month he’s been in solitary confinement. After guards found headphones and an MP3 player charger on him, he was sent to the “punitive segregation” cell. Weezy released the following statement about it:

“I’m guessing that you all have heard about my …. punitive segregation. Basically, no T.V., no radio, no snacks/junkfood, and one phone call a week. This punishment has been handed to me for my earlier MP3 incident. I admit, I f—ed up and now I must deal with the consequences … Obviously, this gives me a lot of time to myself and a lot of alone time with my thoughts, which can be creatively dangerous.”

So after eight long months of torture, the rap world will have their favorite rapper back in action, most likely with a whole arsenal of new songs. While in jail, Weezy’s people and Weezy himself have done a great job keeping him in the news, on the charts, and on people’s minds. I mean, who else has ever had a number one record released while they were in jail?

MTV has taken Weezy’s release seriously, and even dedicated this week as “Welcome Home Weezy” week on MTV news. Staying connected with fans during his sentence has been genius for Lil’ Wayne, as all of his fans are anxiously awaiting to hear some of the material he wrote while he served time. His website weezythanxyou.com posted his final letter to his fans yesterday, read it in full below.

“Hello world! My world! Our world!

As I greet you all in my last days on this island, I must reflect. I think back to when I first arrived and I had no clue of what I’d be experiencing. I was never scared, worried, nor bothered by the situation. For that, I thank God, my family, and you, my amazing fans. I prayed for you all every night, as I’m aware that I was in your prayers as well. The very first day that I received mail, it was about 300 pieces or more! I smiled like a child of Christmas. But when I began to read them, my heart smiled. I laughed with some of you, reasoned with some of you, and even cried with some of you. I responded to as many of you that time would allow. I plan to keep reading and responding after my release. I thank you all for being so very supportive, as I never imagined how much impact my words and life can have. With this knowledge, I vow to continue to be me! For you have assured time that I don’t have to change for no one but God. I will be the same Martian I was when I left, just better. You fans are more than amazing, and I will for to the end of the world for your love. This isn’t the last of weezythanxyou.com I will continue to thank you when I’m home.

I simple LOVE you all.

P.S. Thanx for supporting my YM team the way you do!!

Now I like to thank my wonderful family and friends for never letting me down. Your love and support is worth the world. I am grateful for you all and I couldn’t have done it without your love. Also, I thank everyone who came to visit me. That shit meant a lot, straight up! I would do the same, if not more for you.

Now I must dedicated something to the woman in the picture …

… sitting on this bed with my back against one of the four walls I’ve been confined to, all I can think of is you. Staring at you staring at me, from the picture of you that I see. I try so hard to make the picture smile. You look so serious. Seriously beautiful. You, me, we are one. Then I look further to the right and there’s a picture of “the bed by the water” … where I dream to be with the woman in the picture that still won’t smile. I sometimes talk to the picture, but it never responds. Although, I’ve been told that a picture speaks a thousands words, I only wish that this picture would speak of four … “I love you too.” That would be the perfect response to what I frequently say to it. You see, the picture of “the bed by the water” has sand in it, and the woman in the other picture has sand in her hair … put them together, and she’s there. And when I dream, I’m there with her. Shhh … quietly these four walls become that place in the picture. And the woman in the picture begins to whisper … “I love you too” … she responds!

And now she smiles. Imagination is perfect.

Dedicated to the woman in the picture.

With fans and media alike anxiously awaiting his release, it will be interesting to see what he does when he gets out of prison. Will he be a changed man? No more blunts and sizzurp? What do you think, are you excited for Lil’ Wayne to get out of jail?

Bret Michaels and Miley Cyrus’ Mom Get It On