SaveOnBrew.com really is a genius idea: just type in your zip code and address, and the site gives you a laundry list of beer deals around you. Yes, it’s that freaking easy. And when I say deals, I mean really sweet deals. Once in a while you’ll see 30 racks for less than $10, or an amazing 6-pack of microbrew for $6. I’m gonna use this tonight.

The site was conceptualized, designed, and is operated by the same people who use it: beer drinkers who not only have a love for beer, but also have a love for cheap beer. Back in the day, these guys would scour through weekly coupons searching for the best deals on their favorite brews, and then they came up with a brilliant idea: what if their was one place that polled beer distributors and supermarkets and compiled a nationwide, searchable list for the cheapest beer? And thus SaveOnBrew.com was born. 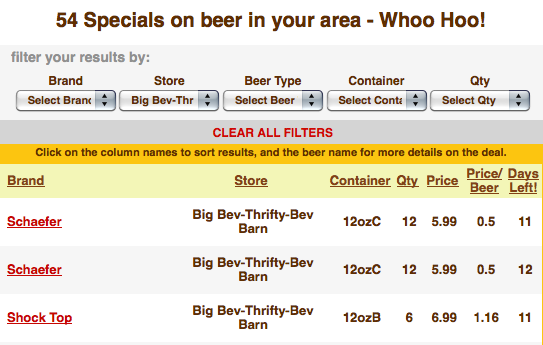 The company also gives away free beer on their facebook fanpage in the form of “beer bouquets” — a six pack of beer in a custom painted metal bucket delivered to your door.

And very, very soon there will be an app for SOB, too. Like within 2 weeks, from what I’ve been told. You can tell the app your favorite beer and it’ll alert you when there’s a deal on it around you. So now you’ll be able to find beer deals on the spot, wherever you happen to be. Convenience, thriftiness, and drunkenness have all come together here, and you’re a fool if you don’t take advantage of it, because all that money you save could be thrown away on more alcohol.

Socialite Approved, Too: CAN U FEEL IT – The UMF Experience Trailer