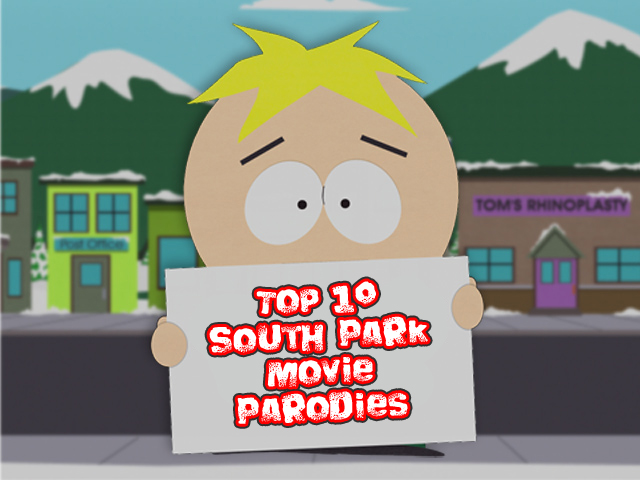 The premiere of South Park’s 15th season is just a few short hours away! If you didn’t already know, you can look forward to seeing the HUMANCENTiPAD in all of its grotesque technological glory tonight. And to celebrate what looks like yet another ridiculous movie parody from Trey Parker and Matt Stone, we’ve compiled some of South Park’s more memorable film homages into one post. We obviously realize that there are more than just these 10, but we had to draw the line somewhere and just pick the very best. Check ’em out and see how your list of favs matches up.

The Mighty Ducks is the classic tale of Gordon Bombay (played by the forgotten Sheen – Emilio Estevez), a disillusioned yuppie who rediscovers his inner jock after being forced into coaching a hockey team of teenage hooligans. In the end, the players learn discipline and teamwork, and together beat their long-time rivals. Emilio regains his hockey honor by defeating his one-time coach and complete asshole Jack Reilly. Stanley’s Cup throws Stan into a similar situation, where he must coach a group of peewee hockey players and win against the superior Denver team in order to restore hope to a child with leukemia. To ensure victory, he brings in Kyle’s brother Ike, a Canadian sure-thing, and the equivalent of Bombay’s Adam Banks. The episode ends in complete tragedy, but you’ll have to find that out for yourself…

Insheeption is South Park’s incredibly direct commentary on the convolution and idiocy of Christopher Nolan’s box office smash Inception. Much like the film on which it is based, the episode features ridiculously fictitious scientific principles on the nature of dreaming including firemen, sheep, and a bunch of other crap that makes no sense. Why are Stan and Mr. Mackey trapped in this dream world? Well, they both have a hoarding problem, and they delved into their own subconscious minds to find out the cause. This episode caught me off guard when I first saw it because I was expecting an episode about hoarding and randomly got tossed into a movie parody. Even Freddy Kreuger makes a cameo appearance.

Black Hawk Down – Red Sleigh Down

War movie parodies are priceless, and nothing is more distasteful then a rip on Black Hawk Down. In this gem, Cartman finds out that he’s going to need to perform an outrageously good deed in order to get onto Santa’s nice list. So he sets off for the North Pole with Mr. Hanky to help convince Santa to bring Christmas to Iraq. Saint Nick agrees, but hits a snag when his sleigh is shot down by an RPG over Baghdad. Having realized that there will be no presents without Santa, the boys find Jesus and set out to rescue Kris Kringle from his captors. As always, Jesus is killed in the line of duty, and the boys escape with Santa…but not before turning Baghdad into a lit up and wreath-covered Christmas wonderland.

Children of the Corn – The Wacky Molestation Adventure

Nothing is creepier than Children of the Corn. The plot revolves around a couple who stumble upon a ghost town inhabited by children who worship a pagan god and commit ritualistic human sacrifice to appease him. The story is basically the same in the Wacky Molestation Adventure, except that the children all had their parents arrested for “molesteration.” What results is a land where two factions fight over a book, and whoever doesn’t have it must sacrifice a tribe member to a statue of John Elway. Yep. The couple that wanders into town gets caught up in their war, and in the end help convince the kids to admit that they lied about being molested.

Not only does this episode rip on the apocalypse film The Day After Tomorrow, but it also puts the government under the microscope after the Hurricane Katrina disaster. Stan and Cartman accidentally crash a boat into a beaver dam, flooding the nearby town of Beaverton. Instead of fixing the problem, the government bickers over who is to blame, eventually settling on global warming as a scapegoat. Scientist Randy Marsh then makes a startling discovery – Global warming is going to cause a worldwide disaster two days before the day after tomorrow. What does that mean exactly? Watch this clip and find out.

Two Days Before the Day After Tomorrow
Tags: SOUTH
PARKmore…

America goes crazy when Obama is elected as the next president of the United States. Using the celebration as a distraction, the politicians involved in the election break into the Smithsonian to steal the Hope Diamond in a heist that is a direct parody of the Ocean’s Trilogy. Whew, that was a mouthful. The episode is complete with smooth-talking, montage, plot twists (including Ike as the inside man, sorry to ruin it for you), and bouncing jazz bass lines. Watch out for Randy Marsh though, he has a habit of stealing the show with his pro-Obama antics and “Yes We Can!” chants.

“About Last Night…” was immediately followed by this episode which kind of stole its thunder. Nothing is funnier than Trey and Matt’s musical numbers, and this homage to High School Musical gave them the chance to fill an episode to the brim with pop tunes and Disney-esque cheer…that is, until the kids realize that everyone was just into singing because of cute theater kid/basketball star Bridon Gueermo, the equivalent of tween heart-throb Zac Efron. Best part of this episode? Kyle pulling off his hat to reveal his beautifully combed mane of red hair (he’s just like Corbin Bleu!).

Lord of the Rings makes my dick hard. And a South Park episode about Lord of the Rings that follows a similar plotline to Lord of the Rings just makes me cream my pants. The only difference is that the ring is a porn video and Mount Doom is The Two Towers video store. Oh man, it’s almost too much satire to handle. Butters is Gollum (perfect) and the fellowship quests to return the tape before it gets into the hands of the evil 5th graders. What could possibly make it any better? How about Backdoor Sluts 9 and Jimmy attempting to say “you shall not pass” to a charging mob of hormonal 12-year-olds on bicycles?

The Return of the Fellowship of the Ring to the Two Towers
Tags: SOUTH
PARKmore…

TRON – You Have 0 Friends

What do social networks look like? Apparently just like TRON, which kinda makes sense. Stan gets pulled into Facebook when his account becomes too powerful for him to control, and he must fight it in order to escape from the fluorescent world of profiles. But South Park has a sick obsession with TRON, and you can find more references to the classic sci-fi tale if you look closely, specifically at Moses, who is an exact replica of the Master Control Program. For quite some time I pondered why they chose this form to portray the prophet who led the Hebrews out of Egypt, and then one day it clicked when I was re-watching TRON: The Master Control Program looks just like a big, glowing orange dredyl on crack.

You Have 0 Friends
Tags: SOUTH
PARKmore…

Duh. This HAD to be number one. Whoever doesn’t want to live in a world where everything is made of tits can go fuck themselves. The premise? Kenny starts huffing cat piss (better known as “cheesing”) to get high, and finds himself in a cartoon world that is an homage to the classic dirty cartoon Heavy Metal. But wait, it doesn’t end there. In the real world, Cartman is busy hiding fugitive cats in his annex in his own separate parody of Schindler’s List. Turns our that Kenny isn’t the only one who enjoys rockin’ tits though, because in the end he has to fight Kyle’s dad in the Breastriary for Major Boobage’s daughter…which turns out to be a sandbox…turns out they were just cheesing their faces off.