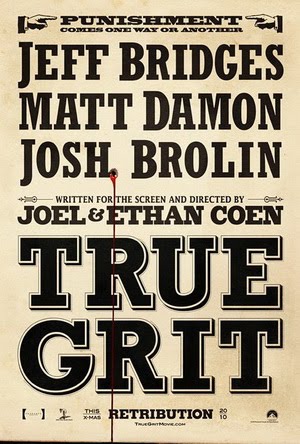 Ever since seeing The Social Network a couple of months ago, I have had one thing on my mind, and one thing only: True Grit. Ok, so maybe it wasn’t the only thing on my mind but I was definitely psyched. Ever since watching The Big Lebowski in a smoked out dorm room seven long years ago, I have been a loyal Coen Brothers fanatic and I have never left a theatre (or pushed off on my DVD player) feeling anything less than amazement. The Coen Brothers and Jeff Bridges teaming up again and for another novel adaptation! Safe to say I was excited. So did I like it? Hell Yeah! Did I love it? Eh…let’s go with maybe.

True Grit was originally a novel written by Charles Portis in 1968. The novel had been adapted for the silver screen before in 1969 with John Wayne playing Rooster Cogburn. The very brief synopsis of True Grit is that it follows and is narrated by a woman named Mattie Ross (Elizabeth Marvel) who flashes us back to when she was 14 years old and a man named Tom Chaney (Josh Brolin) killed her father, taking with him two California gold pieces and a horse. While in town to retrieve her father’s body, Mattie seeks to hire US Marshall Reuben “Rooster” Cogburn (Jeff Bridges) to track Chaney into unsettled country and bring him back for justice. While attempting to hire Cogburn, Mattie comes upon a Texas Ranger named La Boeuf (Matt Damon) who is also trying to track Chaney, in order to bring him back to Texas to be tried for the murder of a senator. Mattie does not like the idea of Chaney being hung for a different crime, so she scoffs at La Boeuf’s request to team up and instead hires Cogburn, however when she goes to Cogburn’s house after coming to an agreement, she finds that Cogburn has left already. Mattie rides out to the river and finds that Cogburn and La Boeuf have decided to join forces on the expedition, in exchange for them both splitting the Texas reward. The three set out together on their pursuit. No spoiler alerts here. Ill end my synopsis there and let you see the movie for yourself; And you should. 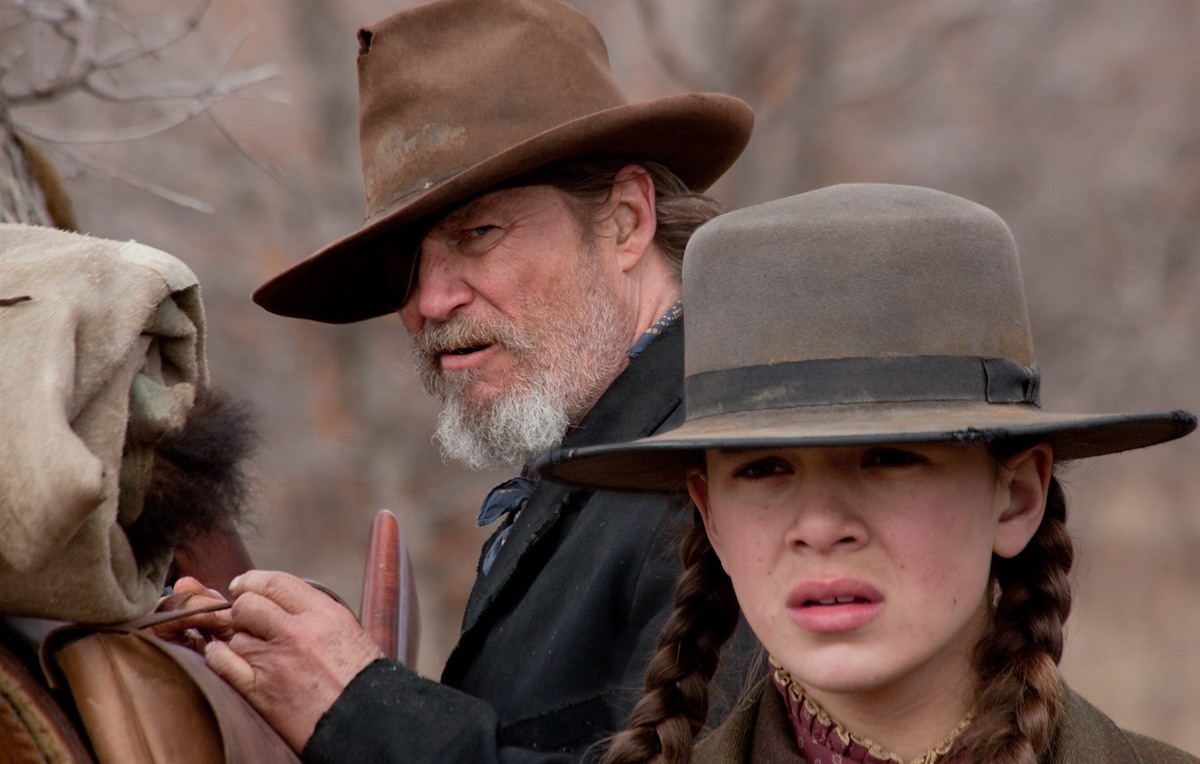 So back to me. Why would I answer “maybe” to a question so seemingly simple as whether or not I loved a movie (and a Coen’s movie for Christsake!!)? I’ll start by saying this is partly my fault. As a longtime fan, and admittedly kind of a snob, I have come to expect a certain amount of subtext from filmmakers like the Coens. The two brothers have such a keen eye for ironic detail, and such a knack for capturing the awkwardness of everyday humanity, that it’s almost impossible for there not to be more to talk about. True Grit on the other hand, is about as straight forward as a movie comes. The dialogue is of course brilliantly witty, and strikingly realistic even for a period piece. As for that thematic depth and/or conversation provoking irony that the Coens are so skilled at seamlessly infusing into their films…well it just wasn’t there. According to the Coen brothers themselves, their aim for this film was not to mess around very much with the novel, and instead take a more “formal, reverent approach” with the focus on adventure and quest. The movie, by their own admission, is meant to be a straight western. Admittedly, this information was a little satisfying in that it alleviated any anxiety that I might have missed something, therefore restoring the confidence of my fragile intellectual ego (have I used the word “snob”). It was also a revelation that sometimes you need to let the movie entertain you the way it intends to, and not come in with already specified expectations. I am sorry I did so. On a semi-related note, I was told by a friend that the original inspiration for making a western was the Coen’s desire to show a scene with “a guy raping a chicken”. I have no idea if this is true or not, but I decided to include it for fear that further research might have cost me the opportunity of using the phrase “raping a chicken” in an article. So there.

My conclusion? I have to see this movie again, in theatres, with a bag of popcorn and an open mind. For now I will say only that as a straight western, it was pretty awesome. The action scenes (there are two bigs ones) were edge of your seat exciting, and as mentioned before, the dialogue is amazingly witty while still true to the period. The Mattie character has some particularly fantastic monologues, and the charmingly old western banter between Cogburn and La Boeuf is laugh out loud funny. The characters are great as well. Cogburn while being fat, drunk, itchy trigger fingered, and obviously extremely flawed, still manages to be both believable and the bad-ass hero needed for this kind of film. I can’t imagine John Wayne doing as good a job as Bridges in this multi-dimensional role. Matt Damon and Josh Brolin are great as well, both playing less memorable roles than Bridges, but serving their respective purposes perfectly and as expected. Bottom line: It was a good story, a good western, and for what it was, a good movie. Go see it. Maybe I’ll see you there. I’m quite sure  that for me it will be a completely different experience. Though part of me is still hoping that the next Coens film is how should I say…more traditional.

Grade(Pending A 2nd Viewing): B+