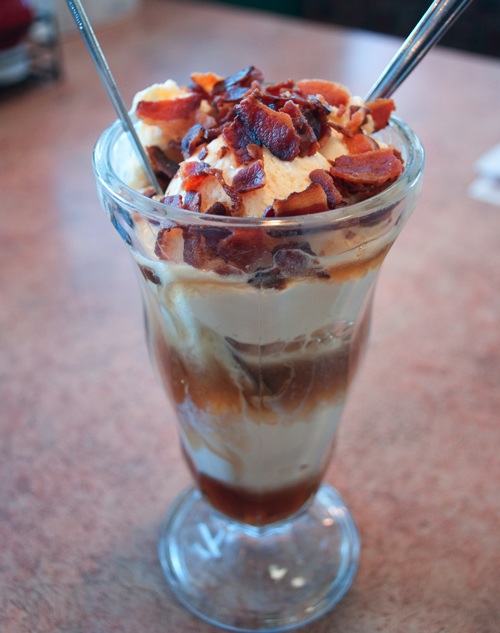 As any bacon lover will tell you, the uses for this awesomely versatile meat are just about endless. You can have it with eggs, on a sandwich, on your pizza, or even wrap a steak it in. Mouth watering yet? See how you feel after that. This week “America’s Diner,” AKA Denny’s, took the old adage “Bacon Makes It Better” and brought it to the next level. Introducing The Maple Bacon Sundae. Sundae, like ice cream Sundae?!? Yes Socialites, bacon and ice cream.

Denny’s of all restaurants should know it’s bacon well, being that they specialize in breakfast, and offer bacon with just about every dish. The national diner chain has previously introduced menu items like Bacon Flapjacks, Bacon Meatloaf, and the BBBLT. Bacon Meatloaf in particular sounds disgustingly amazing, and as for the BBBLT, i’m pretty sure that many B’s are illegal in certain states. Bacon and ice cream though…that’s just plain madness. 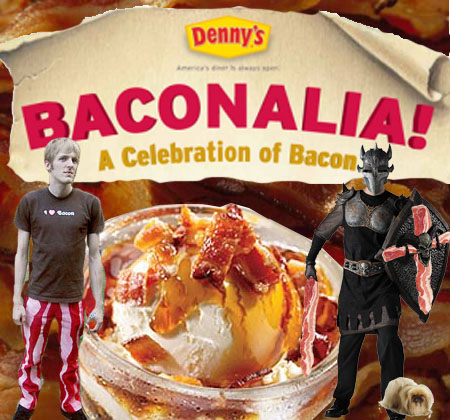 Like most ice cream dishes, The Maple Bacon Sundae is layered to perfection. The bottom layer is maple-flavored syrup, which anyone who’s eaten at Denny’s knows is many shades different than actual maple syrup. The next layer is simply vanilla ice cream, the plainest and most versatile of the ice cream flavors, and perfect for pairing with anything. Then, a salty layer of Denny’s finest Hickory-Smoked Bacon. Repeat all items mentioned one more time, and you have The Maple Bacon Sundae.

As sort of a foodie, I can say that the geniuses at Denny’s laboratories aren’t the first to make the revolutionary discovery that salty goes with sweet. I was actually just recently in a restaurant where they served an appetizer consisting of Pork Belly and Ranch Flavored Ice Cream. Pork Belly is basically like a thicker version of bacon, and the combo was fucking delicious. What makes Denny’s idea so unique is that it’s adding bacon to a dish that is predominantly desert, and even with 24 hour Food Channels shedding light on the most unholy of combinations, that’s pretty crazy. 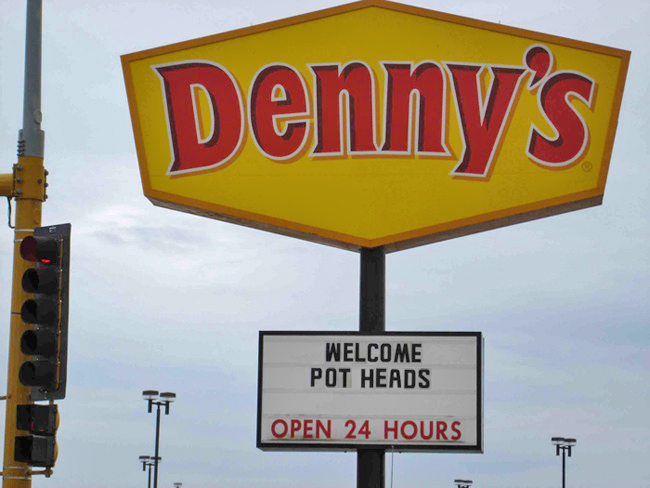 Before you get excited though, just remember this: We’re talking about fucking Denny’s. When’s the last time you ate at Denny’s when you weren’t either stoned drunk, stoned stoned, or mourning the foreclosure on your trailer? If this was a gourmet restaurant, i’d say bring it on. But let’s be realistic here,  what we’re most likely talking about is CVS brand Ice Cream, sitting in fake-ass Maple Syrup, with a few strips of pre-cooked microwavable bacon. If you want to change the rules of food, you have to go all out, and unless Denny’s can do that while still being able to charge you only the pocket change you found under your car seat, you can bet that this is not the case.

As much as I’ll admit that I kinda wanna see how disgusting Denny’s newest creation is, after the “only two links of sausage” incident of 2003, I am no longer welcome. As for you college kids, I know as soon as you read this article there parked lots are going to be filled with smoked out caravans. Do me a favor: when you get home (that is if you can still walk) leave me a comment and let me know what you think. Bring on the love and bring on the hate. Thanks Socialites. One more thing: If Isabel is working, tell her that I lost her number. Thanks again. 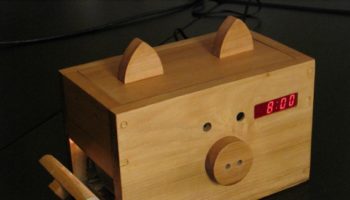