“Do whatever you have to do.”

Two circumstances usually trigger this condescending sentence: 1) when you want to stay out with your boys or 2) when you cancel plans with her to take care of something important. This is easily one of the most frustrating statements a girlfriend can say because while she is granting you freedom to “do whatever you have to do,” there is a whole lot of animosity and repugnance in her tone. The best way to handle this situation without it blowing up into a larger argument is to apologize profusely and hope that she’s thinking with enough rationality to understand where you are coming from.

“You never want to spend time with me.”

This is a typical response you’ll hear when you choose to hang out with your boys instead of your girlfriend. It’s not that we don’t want to spend time, but we just want some time to kick it with the guys. In fact, spending time with our bros is equally, if not more important than spending time with the girlfriend. We need that time to unwind and relax. The more time we have to chill with our boys, the more we can recharge our batteries. We want to spend quality time, but we just need some time for ourselves before we shack up for the night. Girlfriends don’t really seem to understand this so it’s up to the guy to explain it all. He must be extremely careful in doing so, however, because if he is too callous in his explanation, he’ll end up with a one-way ticket to splitsville.

This expresses so much. One word. Three syllables. A million possible interpretations. What does that even mean? How annoying is it when you’re trying to tell your girlfriend something important and her only response is a spiteful “whatever?” Nothing kills a conversation faster than this. It’s a word that takes so little effort to mutter, yet it can cause irreparable damage. There aren’t very many things you can say to steer the conversation away from an argument. You’re pretty much doomed to fail. The best you can do is weather the storm and ride it out.

Who are you to say that we don’t care? Trust us, you’ll know when we no longer care because you’ll be single and we’ll be back in the game, looking to pull some tail. But I digress. It’s not that guys don’t care; it’s just that we don’t always care about the petty details. So when the girlfriend throws the “you don’t even care” card, all you can do is perform minor damage control and be sensitive to her feelings. However, this is much easier in theory than practice. Choose your words wisely because a situation like this can easily blow up in your face.

“Then break up with me…” 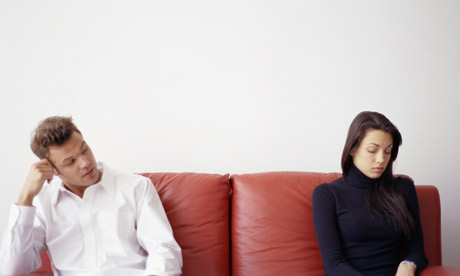 It takes some balls for your girlfriend to say something like this. You might be addressing an issue you have with her or something along those lines, when all of a sudden she comes over the top and hits you with: “If you have all of these issues with me then break up with me.” At this point your first instinct is to roll your eyes and let out a gigantic sigh of frustration. Breaking up with your girlfriend is a more than a spur of the moment decision. There has to be some rationale behind it. Nine times out of ten we will take the whole “break up with me” spiel with a grain of salt, but sometimes a lesson must be learned and we actually might break it off. Sorry.

Coffee Shops Are The New Libraries