Sex Gone Wrong: What Not To Do In Bed Ladies

Sex can be memorable and fun or it can be a fucking disaster. If you are at a party and feeling drunk and in the mood to fuck someone, then do it. However, make sure you do not take part in any of the 10 “mishaps” below. Guys are powerful when it comes to word-of-mouth sex gossip. If you fuck the wrong guy and something bad happens… I’m terribly sorry. Don’t be surprised if you are on a cruise going to Haiti and the bartender says, “Oh I have heard of you! You fucked my sister’s, uncle’s, grandma’s, niece’s, brother’s, mom’s, cousin twice removed and got blood all over his sheets.” “I’m sorry but I am going to have to pass.” 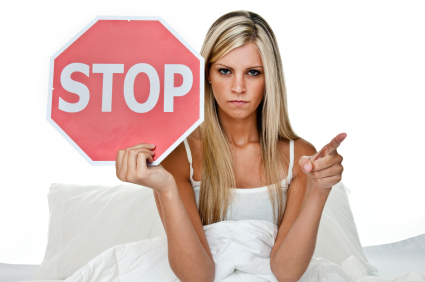 Sometimes accidents like bleeding all over his bedspread happen and are not preventable. Although, hopefully most of you are on the pill and will be knowledgeable of when Aunt Flo is arriving. On the other hand, there are ways to prevent a disaster from happening. If you always manage to fuck a nice guy who never told you that you bite when you suck his dick then that stinks because chances are one day you will fuck someone, do something wrong, and have a bad sex reputation. Don’t be that girl.

Don’t make him do all the work. I have heard guys talk about their one-night stands saying, “OMG, I fucked (insert name here) last night and she laid there like a dead starfish.” Ladies, you don’t want to be the “insert name here girl.” Plus, who wants to just lay there anyway? It would be boring and kind of awkward.

Other then getting your period, this would be very embarrassing. Take a shit before you have sex if need be. Not only is it fucking disgusting, but it would also kill the mood.

This isn’t always preventable but try and keep track of when you are getting your period. If you are even a little bit unsure, then do other sexual activities instead. You don’t have to tell him why.

Falling when drunk or laughing because your shirt gets stuck while taking it off is one thing; don’t randomly laugh in the middle of sex over nothing. I don’t know why anyone would do that but I am assuming it could be nerves. Laughing may make him self-conscience and unable to perform his best in bed.

Shower. Shower. Shower. Obviously it is important to shower whether you have sex or not, but it is a total dealbreaker if somebody literally stinks in the sack. You don’t want to be known as the girl whose vagina smells like crab cakes. GROSS.

Many people have their own preferences on how they maintain their pubic hair, but don’t have it so long that it needs a brush. Stay groomed and clean and there will be no worries!

If you are intoxicated and accidentally fall asleep then the sex you may be having could be classified as rape. Other than being wasted, don’t fall asleep while having sex. If you are that tired then don’t start because guys get something called blue balls which is just cruel and unusual punishment.

If you get a text message, ignore it if you are mid-sex. It can’t be that important and it isn’t sexy to answer your phone in the middle of an orgasm.

Be careful. Don’t do anything dangerous because the last thing you want is to be rushed to the emergency room because you broke your hip falling off the bed. Also, be careful with your body and mouth because you don’t want to cause a penile injury. That’s an awesome way to meet his parents, with a cast around their son’s dick!

So remember Campus Socialites, many things can go wrong during sex but hopefully these 10 mishaps will never happen to you. At least, if they do, let’s hope they don’t happen with the wrong guy.

A Step by Step Guide to Make CBD Gummies at Home