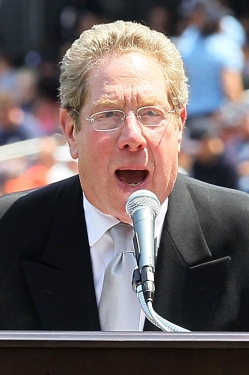 The baseball season is underway and each team has started their chase for a World Series Championship. Meanwhile, New York Yankees announcer John Sterling continues to get better at his job. John has been employed as the voice of the Yankees since 1989 and is considered one of the best in the game.

Last night, Andruw Jones hit his first home run as a Yankee, giving radio announcer John Sterling the opportunity to unveil another new home-run catchphrase: “Andruw Jones makes his bones!” Each Yankee, of course, gets a personalized catchphrase from Sterling, but these homerun calls can range from simple rhymes to elaborate productions involving Broadway lyrics and sometimes even actual singing. In a few cases, Sterling has changed a player’s call, while some lucky players, like Mark Teixeira who gets two catchphrases. Here, are the seven types of John Sterling home-run calls.

Sterling tends to rely on rhyming when presented with a boring name that he can’t really work with: Russell Martin, Andruw Jones, etc. Having said that, Brett Gardner, whose last name is an actual word deserves better, don’t you think?

PLAYS ON PLAYER’S NAME OR NICKNAME

A more creative call, sometimes as in the case of Mark Teixeira or Melky Cabrera,  involving just a fragment of a player’s name.

Used, presumably, when a decent rhyme can’t be found.

Not necessarily used only for players born outside of the United States.

• “The sayonara kid does it again!” (Hideki Matsui)

This is where Sterling truly shines, particularly when he can incorporate his love for Broadway into a call, as in the case of Curtis Granderson or Austin Kearns.

• “Oh Curtis, you’re something sort of Grandish!” (Curtis Granderson, in reference a lyric from the musical Finian’s Rainbow)

• “The Grandy-man can!” (Curtis Granderson, in reference to the song “The Candyman Can”)

• “Hinske with your best shot!” (Erik Hinske, in reference to the song, “Hit Me With Your Best Shot)

A bit of a stretch; used if a player’s name includes the long “e” sound found in “Bambino,” as in “Giambi” or “Tino.”