The Many Faces of Character Comedian, Chris Lilley 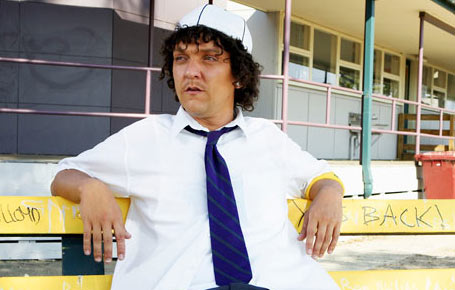 Chris Lilley wears many hats – comedian, television producer, writer, and actor – but is probably best known as the genius behind the Australian mockumentary series We Can Be Heroes: Finding The Australian of the Year, and the 1 Season HBO comedy, Summer Heights High. In both shows he portrays ever main character, male and female. Never heard of him? Well, that’s exactly why you should read on. He has created some of the most hilarious characters on television, and I promise you’ll be left wanting more.

Mr. G is a senior drama teacher at Summer Heights High.  He has very little tolerance for other people and spends all of his time trying to build up the drama department. In this clip, we get a little taste of Mr. G’s “unique” and “experimental” teaching methods.

This is Ja’mie King from Summer Heights High. She is an 11th year exchange student at Summer Heights from Hillford School for girls and is the most entitled, self-centered bitch you’ll ever meet. She also happens to be my favorite character. In this clip, Ja’mie has a few choice words for her mother when she refuses to pick her up from school after all her friends “were being bitches to her.”

Ja’mie is also a central character in We Can Be Heroes, a mockumentary following five different Australian of the Year nominees. She was nominated for her generosity and philanthropy with underprivileged African children. In this clip, she finds out most of her Sudanese sponsor children have died in a flood. Ja’mie obviously takes the news very well.

Pat Mullins was nominated as Australian of the Year for her strength in the face of cancer and for her contributions to the sport of rolling. That’s right, Pat rolls around through different landscapes professionally. Her training consists of hours of rolling back and forth on her living room floor. In this clip, we get to see Pat taking a break from her competitive sport and just playing around with her husband.

Ricky was nominated as Australian of the Year for his great contributions to solar energy, as well as for his surprising theater talents. In this clip, we get to Ricky Wong’s “comedy style,” which is clearly very witty and subtle.

Phil was nominated for his miraculous endurance and survival in a terrible accident involving a bouncy, inflatable castle. Here we see some of Mr. Olivetti’s ingenious parenting tricks as well as his revelation that perhaps he’s more of a man than anyone thought he was.