Normally the NFL Draft is a joyous occasion for me: Pondering which rookies will be drafted when, figuring out which ones will have a fantasy impact, and just the overall combination of two of my favorite sports, college and pro football. Unfortunately, this may be the last relevant piece of NFL action we get for the 2011 year, so let’s hope the two sides can settle their differences and let the rookies join the party and more importantly keep my fantasy football keepers league alive. 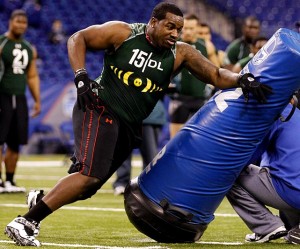 1.     Carolina – Marcell Dareus, DT, Alabama. Literally any position on the defensive side of the ball could use an upgrade, so how about a defensive tackle to help sure up the newly installed 4-3 defense? Marcell Dareus has a great story, he lost both his parents and clearly deserves this. P.S. did anyone see this guy in the National Championship game?

2.     Denver – Von Miller, DE/OLB, Texas A&M. The Bronco defense was bad last year. Like, the worst in the NFL in points and yards allowed per game. There are several guys Denver could take here to bolster their defense, but with Dareus gone, Miller makes a lot of sense here. This draft is going to set the record for most defensive linemen taken in the first round, and this one might be the most athletic. Think Terrell Suggs type talent here.

3.     Buffalo – Cameron Newton, QB, Auburn. Is he the best player? No. Is he the best quarterback? Probably not. But is there anyone in this draft nearly as capable as taking over a game and a franchise? Nope. I see this is one of the more unpredictable top 10’s I can ever remember, if they really see Newton as the transformative player that can be both a Pro Bowl quarterback and face of the franchise who draws a lot of buzz, he’s gone here.

4.     Cincinnati – AJ Green, WR, Georgia. AJ missed four games this year, but still put up All-SEC numbers for the third straight year. Talking heads say AJ Green is the most talented wide receiver prospect since Calvin Johnson… not a bad comparison. By drafting the best pure pass-catching talent in the draft the Bengals can rid themselves of unhappy Chad OchoCinco. Green is an immediate starter and the rare big-time, physical, fast receiver who has the route-running skills and understanding to match his skill-set.

5.     Arizona – Blaine Gabbert, QB, Missouri. The Cardinals need a quarterback bad. Max Hall or John Skelton are definitely not long term solutions. He offers elite size, accuracy, athleticism and the smarts to pick things up quickly at the NFL level. This is a pick I could see going in several directions, but if Arizona isn’t confident they can get a suitable veteran fix in at quarterback, Gabbert is a good choice. A high pick on a quarterback may be the only thing to keep Larry Fitzgerald in town.

6.     Cleveland – Robert Quinn, DE, North Carolina. Not a bad gig for Quinn. He gets the year off as result of a suspension for agent relations in North Carolina and he is still a top ten pick based on talent alone? Yes, he is that good. It’s very close between Quinn and Julio Jones. I had the latter here in a previous update, but the Mike Holmgren-Bill Walsh philosophy is to pass on receivers unless most of the other positions on the roster are shored up. That’s not the case in Cleveland, where the Browns need all new 4-3 personnel. Plus, I don’t think the Browns want another drop-happy receiver after the Braylon Edwards debacle.

7.     San Francisco – Patrick Peterson, CB, LSU. Peterson is without a doubt one of my favorite players in this draft. He’s big, fast, can cover, and can return kicks. In talent alone he’s top 2-3, but on need he’s top ten.

8.     Tennessee – Nick Fairley, DT, Auburn. Tennessee was rarely as toothless defensively under Jeff Fisher as it was in his last season, and the lack of interior pressure from the line was a big part of that. Fairley doesn’t come without risk, however. He was a one-year wonder at Auburn, and there are questions about how dedicated he’ll be. Critics love to hate his off-the-field issues, but when it comes down to having him suit up on Sundays, he may have the most potential out of any defensive end in the draft.

9.     Dallas – Tyron Smith, OT, USC. Wow, well where to start. Dallas went from a Super Bowl contender to the laughing stock of the league in a matter of about 10 weeks. They can trade back a few spots and still grab Tyron (a huge need) or trade up to get Patrick Peterson.

10.  Washington – Julio Jones, WR, Alabama. My favorite wide receiver in the draft, Julio had a huge combine. With both top quarterbacks gone and a plethora of running backs on the roster, the Redskins should grab one of the best offensive playmakers in the draft. He lacks slightly behind AJ Green in frame and ball skills, but he is still a can’t miss prospect. 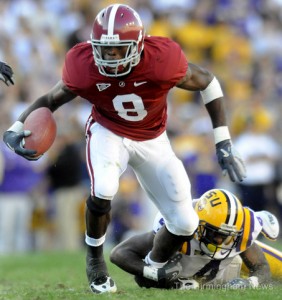 12.  Minnesota  – Jake Locker, QB, Washington. “He’s as tough as any player, quarterback or otherwise, in this draft, and he is one great leader,” says Jon Gruden, who analyzed Locker for his ESPN quarterback-prospect show. So, the Vikes roll the dice? Time will tell.

13.  Detroit – Prince Amukamara, CB, Nebraska. When it comes to Prince, he’s as good a corner prospect as you can get. When it comes to the Lions, they simply need as much defensive help as possible. It’s a match made in heaven.

14.  St. Louis – Ryan Kerrigan, DE/OLB, Purdue. Trade up alert! I think the Rams will trade up to grab either AJ Green or Julio Jones to grow along with Sam Bradford, but Kerrigan could play a number of positions in the St. Louis front seven.

15.  Miami – Mike Pouncey, OL, Florida. I’ve had Mark Ingram slotted here for what seems like an eternity. But teams are now apparently scared of Ingram’s potentially arthritic knee. This could cause him to slip into the second round. If the 2011 NFL Draft unfolds like this, the Dolphins would be, as Emmitt would say, stuck between a rock and a hard rock. None of the top players available fill Miami’s prominent needs. The closest prospect to doing so is Mike Pouncey. In case you had any doubts about Mike this year, just take a look at his twin brother starting at center in the Pro Bowl for the Steelers. Mike is more of a natural guard, but the team that gets him will not mind.

16.  Jacksonville – JJ Watt, DE, Wisconsin. A man with an absolute motor. Not only can he stuff the run but he is quick enough to get to the edge. Jacksonville is another team that could trade up for a wide out as well.

17.  New England (from Oakland) – Cameron Jordan, DE, California. Another extremely athletic defensive lineman, Jordan could anchor the defensive line along for years to come. Last year, New England had one of the worst run defenses in the league.

18.  San Diego – Da’Quan Bowers, DE, Clemson. Injury issues have moved a potential first overall pick down out of the top ten, but I’m not sold on those rumors. Where he gets drafted will be a direct reflection on his health, not physical ability. Nobody knows how legit the concerns about Bowers’ knee are, aside from teams themselves. Even with the injury concerns, he would be well worth this pick, and the Chargers could reap the rewards.

19.  New York Giants – Anthony Costanzo, OT, Boston College. I’m as sick as the next guy about saying someone from Boston is needed in New York, but it is true. But he was the most versatile lineman at the Senior Bowl, started for four seasons at the school where Tom Coughlin used to coach, and is one of the quickest studies of any player in this draft. The Giants have three starting O-linemen (Shaun O’Hara, Rich Seubert, David Diehl) who are 30 or older, and Castonzo can plug in at four line spots. 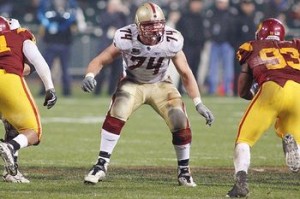 20.  Tampa Bay – Adrian Clayborn, DE, Iowa. A huge physical presence, he will join the two defensive tackles drafted in the first round last year (Gerald McCoy and Brian Price) to anchor the trenches for the next decade.

21.  Kansas City – Gabe Carimi, OT, Wisconsin. Kansas City needed a tackle last year but opted for Eric Berry (not a bad consolation prize). Now that their running game is in full stride, why not bring along a rookie to develop and let contribute?

23.  Philadelphia – Danny Watkins, OT, Baylor. Andy Reid is said to love Colorado cornerback Jimmy Smith, and he’s a viable option given Philly’s need in the secondary. But how can you forget the way quarterback Michael Vick got hammered in the second half of the season behind that porous and injury-riddled Eagles offensive line? Watkins is a versatile and hard-nosed competitor, and Reid loves those kind of guys, too.

24. New Orleans – Justin Houston, DE/OLB, Georgia. Will Smith has been solid for the Saints for many years. It’s about time they draft a young stud to play opposite him.

25.  Seattle – Marvin Austin, DT, North Carolina. No team wants to trade down more than Seattle, which has seven big holes to fill, including two at guard and one at tackle, and that’s before we even get to quarterback. The Seahawks will probably lose Matt Hasselbeck to free agency, but I don’t see them taking a passer in the first two rounds unless they trade down.

27.  Atlanta – Aaron Williams, DB, Texas. Various reports are that Atlanta will try to trade up for a WR but with them picking at 27 I think they will go with Aaron Williams. Williams is a guy you grab when your secondary is already decent so you can plug and play him. He’s a natural corner, but his value doubles as that he can also play safety.

28.  New England Patriots – Mark Ingram, RB, Alabama. Meet the only running back that should even be considered a first round pick. The Patriots could choose best available here and go with Marky Mark. 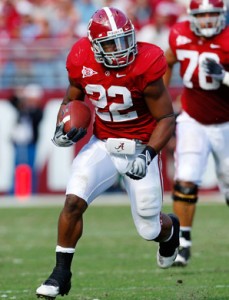 30.  New York Jets – Muhammad Wilkerson, DL, Temple. Speaking of value picks, I’ve seen Wilkerson projected as high as No. 11 in this draft. Rex Ryan, who’s been to every good defensive line prospect’s Pro Day this spring, would be able to use the 6-4, 315-pound Wilkerson as a poor man’s Haloti Ngata, which is to say all over the front. When you can run 4.96 seconds in the 40, and you’re as powerful as Wilkerson, you’re made for Ryan’s attacking defense.

Did you see the Super Bowl? Packers receivers Jordy Nelson and Greg Jennings abused Pittsburgh’s secondary, and without knowing if he’s going to be able to improve the backfield through free agency this year, Steelers personnel czar Kevin Colbert can’t afford to outthink himself here. He’s got to take the best cornerback left, unless one of the top two or three tackles Colbert’s eyeing falls all the way down to here.

32.  Green Bay – Cameron Heyward, DE, Ohio State. An absolute monster with an NFL pedigree, the first round ends the way few have before: 13 defensive linemen taken. Heyward on the other side of Clay Matthews spells disaster for opposing offensi