The Only Reason I Watched the Super Bowl: Glee

Sunday night in case you were (a) too drunk to notice, or (b) living under a rock, the Super Bowl was on. Because my beloved New England Patriots were not in the game, the only thing I really paid attention to was the half-time show and the commercials. Who won wasn’t really important to me (though I was told to root for the Packers to not be disowned by the rents). The best part of the Super Bowl was when it ended and the new episode of Glee started. 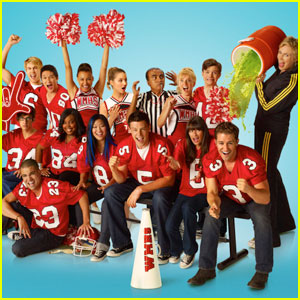 It started off with a performance of “California Gurls” with lots of cheerleaders, BMX riders, and girls shooting fireworks outta their boobs. Way to try and get all those drunk dudes watching the game to keep watching. Anyway, like Sue said, the performance was boring. Maybe it was because I literally cannot stand that song or the tequila was wearing off, but regardless, I was expecting something way more amazing. If only there was someone flying out of a human cannon. 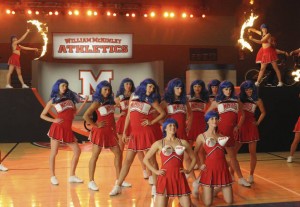 So this next part of “Glee” really urks me. I hate hate hate all the slushie scenes. Not because of the bullying, but because it is a waste of a perfectly good slushie. And to throw that on a kid in a wheelchair, well, that’s just cruel. Slushies have become so synonymous with the show that I usually have to have one while watching. Anyway, all the slushie tossing just furthers all the football/glee club hate and Mr. Schu just can’t have that anymore. The only way to settle this feud apparently is to make the football players join the glee club for one week. 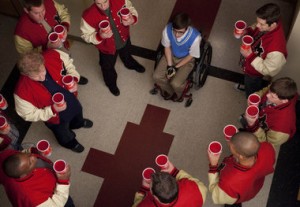 Turns out, the football team can dance. Guess McKinley High is just a breeding group for secret stars afraid to show their talents. The bonding is working, the awwing is happening, and it looks like both groups might finally have reached a common ground. But this is “Glee,” and for some reason, Ryan Murphy just does not enjoy happy endings. So after all of the guys do a zombie-inspired performance of the Zombie’s, “She’s Not There,” they are immediately confronted by the McKinley High Hockey team. First off, McKinley has a hockey team? Though that made me real happy because I would rather watch a hockey-inspired episode any day, my other thought was what is up with all the mullets? That is not the hockey flow that I love. 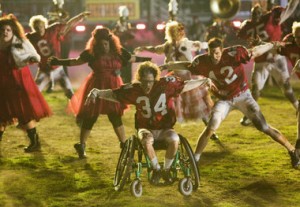 The big, bad football players don’t enjoy being slushied as much as they enjoy giving them out, who would’ve guessed that? So they put on a big bitch fit. Seriously, I don’t think I’ve ever watched a show with this many guys bitching about stupid things. Wipe the slushie outta your eyes and move on! The only person on the show who I look forward to having bitch fits is Sue Sylvester. No one else would find a reason to complain over safety issues regarding shooting her Cheerios out of human cannons. Because Will is always such an ass to her, Sue decides to be the huge bitch that she is and make all the Cheerio girls in glee choose between the two.

Of course, they choose the team. Popularity is everything in McKinley High if you didn’t already know that. Now the Glee club is three girls short and the football team is without most of the team, what will they do? The girls in the club, including that large wrestling chick who I am still questioning why she’s there, decide to man up and join the football team. Literally dumbest idea I’ve ever heard and this is coming from someone who ducks when balls get thrown my way. Anyway, they end up playing, the teams sucks, and poor Tina gets tackled. Thankfully, there was that really precious Asian love moment and the awwing happened again.

With pretty much zero hope left, Finn decides to take his good looking self over to the Cheerios and convince Quinn, Santana, and Brittany to come back. Just saying, he could probably convince me to do just about anything. Obviously it works, Sue makes a hilarious foursome reference, and, yay, glee girls are back. Now if only those stupid football players would stop their whining and get to dancing…Cue Puck, and a slightly inspirational pep talk that manages to get all the guys minus Karofsky, the queen of all bitching, to come back. 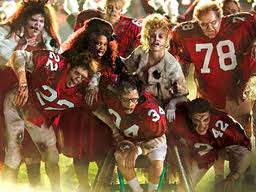 The whole club/team comes together for the half-time performance of “Thriller/Heads Will Roll.” It is as amazing as you would think. Zombie football players, creepy dressed-up biddies, and Karofsky deciding to not be a jackass. Ryan Murphy, you have won me over. The performance was thankfully anything but boring and pretty much saved the otherwise extra-cheestastic episode. In typical football championship TV style, our heroes, the McKinley football team, win. Sue loses her first ever cheerleading competition and finds out during an interview with one of my role models, Katie Couric, that the Glee club is getting her budget. Looking forward to another Sue freak out.

In the end, Karofsky is still a douche bag and thinks Glee club is lame. He says it best, “This is high school, people’s memory for good stuff lasts about as long as their Facebook statuses.” He’s on the champion football team, why would he ever wanna be a part of the club who sings Journey and show tunes? But this wasn’t the end. Finn/Quinn kiss, did that really happen?!? It did, and then it ended in typical Ryan Murphy form…wanting to make us suffer, waiting until next week’s episode.

A Tribute to Darren Criss

Glee GQ Photo Shoot: Have They Gone Too Far?