To Serve and Protect? Every Person For Themselves

It is a given that University Police are present to patrol, serve and protect our campus- or so we think. It’s crazy that for the last few years, the University Police Department at Buffalo State College isn’t really doing what they are being paid to do. With sky rocketing costs just to have them “work” per hour, many student organizations are in jeopardy of compromising their big-name annual events.

“The safety and well-being of Buffalo State students, faculty, staff, and visitors is the Buffalo State College University Police Department’s highest priority. Vested with full police powers, University Police officers promote safety and security on campus by being proactive: they patrol campus routinely, enforce the law, and offer educational programs on safety. The department is committed to both the philosophy and the practice of community policing. When investigating crimes, the University Police Department works closely with area law enforcement agencies and shares information with them.”

The students who go here will definitely tell you that this is not what UPD does for this campus. What students need to realize is that UPD is getting completely out of hand to get paid and I will let you know why. For one, it is starting to get expensive to pay UPD by the hour. To get a UPD officer for an event on campus, they cost forty-three dollars per officer per hour and, as hard as it is to believe, that money adds up. There is no way that the student organizations can have just one UPD officer for an event. In this academic year alone, at least three UPD officers will be present at an event.

There’s a new policy for having UPD at events, according to the main chief Pete Carrey. The policy before was that depending on the amount of people expected at an event, that will be the number of UPD showing up. That is NOT the case now, the amount of UPD now depends on how big the space is. On a realistic level, how can UPD be sure that so many people are going to show up to an event? What if a lot of people do not show up? The money still goes right into the pockets of UPD, since they have to get paid. Although I would think that UPD gets paid by the college, they get paid by the state. I remember them once stating that that we should be grateful that we, as students, get the special price of forty-three dollars an hour, instead of the regular price of eighty dollars per hour. One of the biggest concerns up to date is the main issue that everyone sees; we are not getting our money’s worth with UPD. For one, these officers look too old to be patrolling on this campus. Next, these officers just lay on their behind on some lazy tip. Let me give you a run down of what they do:

1. Eat some food (preferably a donut)

2. Text or talk on the phone

3. Chit-chat with some other officers OUTSIDE or the location/venue

4. Do anything but watch over the event that they are getting paid to patrol

5. Look outside a window

6. Daze in any random direction (as to say “I could care less about what’s taking place”)

The thing that irritates the students the most is the fact that UPD is very quick to shut down events right on the clock, try and scram people outside of the venue, and be ready to leave when their contract is up. Now you tell me if this falls under the duties of the synopsis that I pulled up above. If anything, they are quick to try and wash their hands and tell students who are putting on events, “if you can help us get the people out as smooth as possible, then that will help us out and make our lives easier”. Wait a minute, I though that’s what you are getting paid for?

There has been a lot of talk and complaints about UPD overcharging for weak services, but there isn’t anything being done about it. My students, Greeks and fellow student organizations, the first thing that we need to do is to put this information out to the students at large. The next thing that we need to do is hold a meeting together and try to fight off the price of UPD because to pay almost one thousand dollars for six officers for only a few hours is ridiculous-I’m just saying. Get students to sign a petition and attend a USG meeting to propose a UPD Budget of ten thousand dollars (hypothetically speaking), because this is nuts. UPD alone can take up half a student organization’s budget- just something to think about. If you know you want events to live on and keep up with tradition, help out and spread the word. The last thing we want is for student life to die off because of depletion of budgets to pay for UPD. Shoot, for all those claims that they have no “jusrisdiction” or cannot control situations they feel are too out of hand, the school should invest in BPD instead so that these rent-a-cops will not feel too comfortable in their positions. 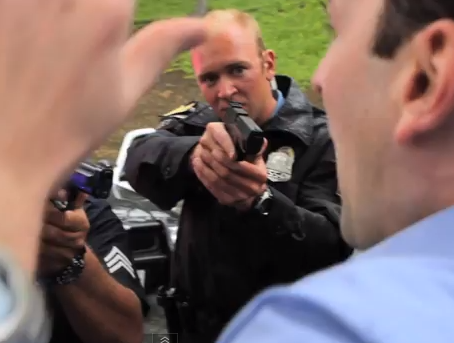 Don’t Let Campus PD Do This To You (Video)