Welcome to the latest, as well as final, edition of “Weekly Rant by the Sexually Frustrated,” a weekly column written by me, the fabulous Campus Diva who needs to get some things off her chest. Read about how there is never a good time to begin a relationship after the jump.

Something that has become increasingly clear throughout my post-acne, post-teenage life is my complete fear of commitment. I have realized there is never, and probably never will be, a great time to begin a relationship.

I think a lot of people go through this; I can’t be the only person afraid of making a commitment, though it would seem I share this quality with the frat-guy-generation more so than the girls I know. When I was younger, I never thought there was a huge difference between being “together” with someone and having a “relationship” with someone. It seemed like a bullshit reason to be able to hook up with as many other people as you want without feeling super guilty. 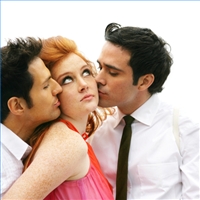 But maybe that’s exactly what the big difference is. And there is a HUGE difference. When I know a guy is into me, sure I might feel guilty if I went on a few dates with him but still chose to hook up with someone else, but it’s not a deal breaker. The guy who I’m somewhat dating cannot get explicitly angry because, hey, we never committed to one another. Just like if I see he is sort of talking to another girl, I can’t really say anything either.

The thing is, once you start seeing someone, all of a sudden you realize how many other eligible bachelors there are out there. I will go on severe dry spells (let’s face it, this article is under “Sexually Frustrated”), but then, three guys come at once. And no, I don’t mean anything dirty in that last sentence, I mean they come into my life at once.

Plus, as a graduating college student, I have literally no free time. It’s important for me to spend as much time as possible with my friends when I’m not working or studying, so how do you make time for a boyfriend?

And after graduation I am traveling and might move to another state, so when is it a good time to be in a relationship? I’m literally asking. At what point is someone worth it enough to drop all your other options, make time for them when you could be drinking with your friends, and decide that that is the person you want to be with, at least for now?

So to sum up? Maybe after weeks of writing this “sexually frustrated” column, maybe I really am the only reason I am this way. Sure, guys can be dicks, but I’m not willing to commit to anyone because there is always a reason not to.

I guess one might have thought this column would end with me finding a boyfriend and that’s why I am no longer sexually frustrated, but it looks like I’m choosing the other way. I’m choosing to remain single because I don’t know any other way. And one day I’m sure this will change since I don’t exactly plan on dying alone. But prepare for a revolution, at least with my own life. I am single and I’m okay with it. So girls, stop falling into relationships just for the sake of being in them, and guys, don’t stay in a relationship where the girl takes advantage of you.

Be single, because it’s not necessarily a bad thing. In fact, it could be sort of fabulous.

Some Reasons It’s Good To Be A Man