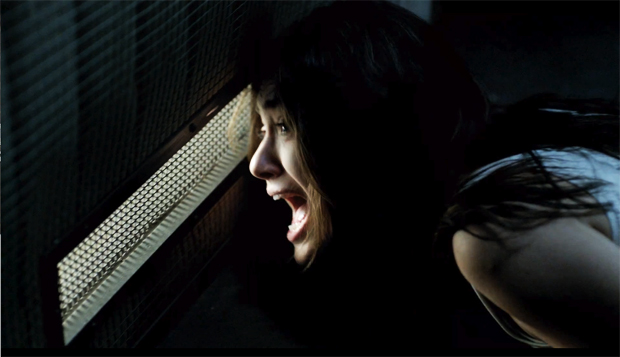 Inside, a movie that claims to be the world’s most interactive film experience, launched today with a trailer and a site that allows users to submit auditions via YouTube. The movie is directed by DJ Caruso (Disturbia, I Am Number Four), stars Emmy Rossum (The Day After Tomorrow), and is sponsored by Toshiba and Intel. We were curious, so we investigated.

Check out the trailer before we get into the process behind the film’s creation:

From what I understand, the movie is not going to be a major theater release, but will take place in four to five minute sections, released on the Internet every few days, that promote viewer interaction. In between parts, fans will need to collect clues and then tweet, post on Facebook, and utilize videologs to help the main character, Christina (Rossum), figure out where she is and why she’s locked there with only a Toshiba laptop and an untraceable Internet connection. But don’t worry, the minds behind the film have already said that there’s no chance of her demise. So, if you’re looking for straight gore and death, you came to the wrong place – this is a PG-13 area.

It will all come to an end in August, when the last episode premieres. When the entire film finally streams as one piece, the most useful social media interaction will be slapped onto already filmed scenes with a blank computer screen. So you could potentially be in a movie with Emmy Rossum…nice. If you’re as curious as we were, or just want to get involved, head over to Inside‘s Official Site.

The Game by Neil Strauss Gets Green Light as a Movie