People You Meet On The Chicago El After Midnight

Chicago’s public transportation system is, as Forrest Gump would say, like a box of chocolates: you never know what you’re going to get. But you do know it’s probably going to be gross. And after the clock strikes twelve, the crowd on the el could give any freak show a run for its money. Here are the seven kinds of people you meet on the el after midnight.

After any late-night sporting event, the trains will be packed with drunk suburbanite sports fans swaddled in jerseys, who press up against you and infuse your clothes with the scent of beer, sweat, and brats (Chicago-ese for bratwursts.) Da fans will be loud and either looking for friends or for a fight. If Chicago won, they will be in a festive mood and will try to get the rest of the train car to join in singing “Go Cubs Go” or a slurred acapella version of “Chelsea Dagger”. If you weren’t at the game, don’t worry—they will loudly rehash every glorious detail for you. But if Chicago lost, the mood will be morose and belligerent. Anyone wearing the enemy team’s jersey will be taunted and/or coerced to fight.

Look, even if that brown paper bag was fooling us, your Eau de Whiskey smell and drunken shouting would have given you away anyway. These are people that may or may not have homes and who ride the el all night from one end of the line to the other, enjoying some of life’s simple pleasures like hard liquor and crystal meth. And while it’s hard to have compassion for someone who’s simultaneously urinating on the seat and slurring at you that “all blue-eyed people go to hell”, you should always try to empathize. After all, that could be you someday—especially if you’re a journalism major.

NU students can be spotted by their all-purple Wildcat T-shirt ensembles and expressions of pure terror at leaving the safe haven of Evanston to venture into the city for a night. They are probably either on their way to McFadden’s or some hookah bar in Boystown that they heard was “totally chill”, even though the only people who ever really look cool in a hookah bar are Turkish scholars. They will cluster in a corner of the train car and giggle loudly at Harry Potter puns and algorithm-related gossip. Avoid.

These are the hard-working security guards, nurses, and waitresses of the city who just got off their shift and are forced to take the CTA home along with the drunks, crazies, and drunk and crazy college students. They slouch against the windows, exhausted, and look at you and your friends with such world-weary complacency that it will make you kind of sad. You will reflect on how lucky you are not to have a family to support and bills to pay.

Unless da Bears just won—then you will just hate these buzzkills for bringing down your Four Loko-fueled elation. 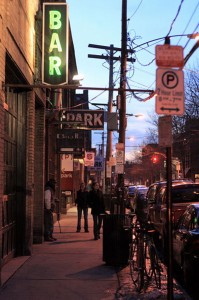 You will usually meet them between the Addison stop and downtown. They can be college kids from DePaul or married men from Denver—drunk bar crawlers on the CTA are the friendliest people in the world. And depending on what kind of mood you’re in or how much you’ve had to drink, they will either be obnoxious or extremely entertaining. Watching them try to stand upright on a crowded, moving train is like watching someone learning how to surf for the first time, but with even more hilarious wipeouts—because there are no homeless guys’ laps to accidentally fall into in the ocean.

Plus, their shenanigans usually make for the best stories.

For example, a group of people once burst onto my train car holding a life-size cardboard cutout of the Dos Equis man wearing a sombrero that they apparently stole from a bar. They then proceeded to make it “talk” to everyone in a mildly racist Spanish accent. Well, another intoxicated bar-crawler wasn’t having any of it, and he got so mad that he staggered overand punched it. Let me repeat: I got to watch a grown man actually punch a cardboard cutout in the face.

Probably on their way to a Mad Men-themed party in Wicker Park, they are the NU students in 6-10 years but with uglier, more expensive clothes and a cynical attitude.

How to Become a Good Sports Writer

A Step by Step Guide to Make CBD Gummies at Home