First it was Magic and Bird going at it. Magic – the slick passing, ever so happy point guard that can bring down 15 rebounds in any game he wanted, and you had the Hick from French Lick, Larry Bird, the crazy white boy that would do anything, and I mean ANYTHING, to win. But with these players retired, the rivalry between the Lakers and the Celtics has not been the same. Sure it is entertaining to watch games between the two teams because you know the history of their rivalries, but it was not the same when the Lakers were soaring and the Celts were basically boring in the 90’s and 2000’s. That all changed when the Celtics brought in Kevin Garnett and Ray Allen to mix with Paul Pierce and their newly drafted point guard Rajon Rondo in 2008, when they defeated Kobe Bryant’s Lakers en route to to the franchise’s 17th NBA title.  Since that rekindling of the old competitive fire, every sports fan now tunes into games between these two teams because they rule their respective conferences and are equal to each other in almost every way on the basketball court.

Well I was right about the Lakers making it back to the finals, but I was shocked by how easily the Celtics won in their 6 game series over the Magic. In the wins they absolutely dominated a team with as much talent on their roster as any other team in the NBA. The Celtics tough-nosed defense is back and the Lakers will have to work through their main man, Kobe Bryant, to distribute and score like he always does to win this series.

Now to the matchups…

PG – Rajon Rondo vs. Derek Fisher: Well this one, 100 percent goes to Rondo, he has been Boston’s MVP so far in the playoffs and basically makes the Boston offense go. Advantage Rondo.

SG – Ray Allen vs. Kobe Bryant: Ray Allen is one of the best shooters in the game, he can run through a screen and hit a jumpshot over anybody.  Allen also can drive and take it to the basket with relative ease, but Kobe Bryant is the Black Mamba, he is insanely good at basketball and is the best basketball player in the NBA. Advantage Kobe.

SF – Paul Pierce vs. Ron Artest: Artest is one of the best defenders in the game and it is going to be very interesting to see how he fairs against Pierce, who is such a tricky and crafty scorer. Pierce can also lock up a player and is a better shooter and distributor then Artest. Advantage Pierce.

PF – Kevin Garnett vs. Pau Gasol: Garnett is going to the Hall of Fame without a doubt, Gasol is still building his resume, but can be going there as well with the way he has been playing the past couple of years. Even though many people say he is soft, I think this will be the series where we see the real Pau Gasol and he will have his way with a aging Garnett. Advantage Gasol.

C – Kendrick Perkins vs. Andrew Bynum: Both players are still young and developing, but right now Bynum can steal you a game.  He can go out there and rip down 15 rebs and drop 20 points, any given game, which makes this Lakers team so dangerous to have two bigs, that can score like Bynum and Gasol can. Advantage Bynum.

BENCH – Rasheed Wallace, Glen Davis, and Tony Allen vs. Jordan Farmar, Lamar Odom and Shannon Brown: The Lakers bench is not going to win you a game, maybe Odom can contribute nicely like he normally does, but Farmar and Brown are not game changers. But as we have seen in the past, Davis and Wallace are, they can contribute in big games, in big situations that it will be hard for the Lakers to match up with them along with Garnett and Perkins down low. Advantage Celtics.

Series outcome – This one is going 7 for sure. Tough defense and buzzer beaters will be a given in this series. But in my eyes with Phil Jackson willing this team as one of the most experienced championship coaches of all-time, the Lakers will prevail in the 7 game series. And, as usual, Kobe will be Kobe. 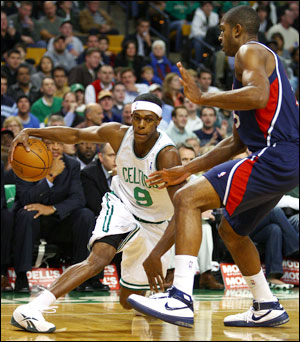 10 NBA Stars and the Foreign Countries They Should Play For