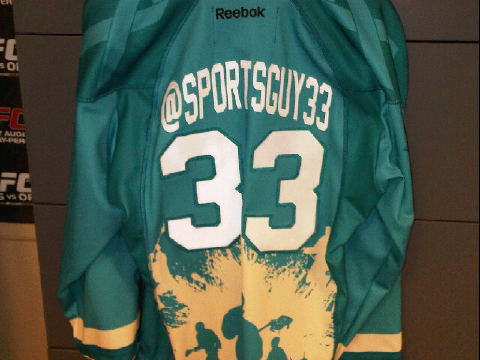 Our generation, simply put, is defined by social media. Everyday millions of new people are using forms of social media to stay connected with their friends, family, and co- workers. So, it was only a matter of time before a professional sports team took Twitter to a whole new level.  The Philadelphia Wings of the National Lacrosse League  debuted their brand new social jerseys last night, featuring Twitter handles on the back of jerseys instead of last names. By the way, Philadelphia won the game but who honestly cares? The real story is that Twitter is a marketing tool that sports team are willing to experiement with if it means reaching a larger fan base.

This is a pretty ingenious concept, bringing national attention to a sport that doesn’t receive much coverage. Most sports owners would rather see their star athletes limit the use of Twitter (See Rob Gronkowski and porn star Bibi Jones), but here you have an entire organization embracing Twitter and even forcing their players to have accounts. Imagine if other sports started copying the Philadelphia Wings, forcing players to have an active Twitter handle. You thought the Patriots hated Chad Ochocinco before? Think about the backlash when his back says @Ochocinco. How about seeing @KingJames take the court (Who calls themselves a King with 0 rings?) or Cincinnati Reds’ 2nd baseman @DatDudeBP run out onto the field.

We are probably still a long way from witnessing this in our more mainstream sporting events. For now fans will continue to use Twitter as a way to debate the likes of Tim Tebow or the latest nickname for overnight sensation Jeremy Lin (personal favorite: Super Lintendo). The big teams can never deny however that using Twitter accounts on merchandise would clearly create more revenue and more engagement. At the end of the day, this attracts a broader fan base which is a marketer or professional owner’s dream. I have a feeling this will not be the last time we see Twitter handles on the back of player jerseys.